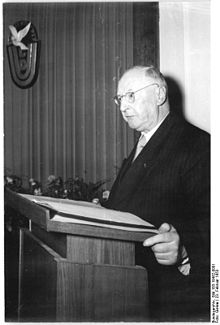 Reinhold Lobedanz (born August 29, 1880 in Schwerin ; † March 5, 1955 ) was a German politician. As a member of the Christian Democratic Union of Germany (GDR) block party , he was President of the GDR Land Chamber .

Lobedanz comes from a German-Danish family of scholars and officials. His father was the high school professor Dr. Emil Lobedanz and his mother the pedagogue Franziska v. Sievers (a great-granddaughter of David Reinhold von Sievers ). After completing high school from 1890 to 1899, he studied law at the Ruprecht-Karls University of Heidelberg , the University of Leipzig and the University of Rostock . In 1900 he became active in the Corps Lusatia Leipzig . He passed the first legal exam and was awarded a Dr. iur. PhD. After passing the second exam in 1907, he entered the state service in Mecklenburg. From 1922 to 1930 he was the local chairman of the German Democratic Party (DDP) in Schwerin. He later served as state chairman of the DDP in Mecklenburg-Schwerin . In the 1920s and 1930s, Lobedanz worked as a ministerial advisor in changing departments in the Free State of Mecklenburg-Schwerin. In 1933 he was transferred from the Ministry of the Interior to the Ministry of Education, Art, Spiritual and Medical Affairs. During the National Socialist era , Lobedanz was a member of the Association of National Socialist German Jurists (BNSDJ) , of the NSDAP's ring of sacrifices and was a block warden .

After the Second World War, in July 1945 he was one of the founders of the Mecklenburg-Western Pomerania regional association of the Christian Democratic Union. As the only state chairman in the Soviet Zone / GDR, Lobedanz remained in office from 1945 to 1952. After Andreas Hermes and Walther Schreiber were dismissed by the Soviet Military Administration (SMAD) in December 1945, Lobedanz also took over the office of third chairman of the CDU in the Soviet Zone. At the CDU party conference in Erfurt in 1948, he was elected 4th chairman. Lobedanz was a member of the party executive of the GDR CDU until his death.

From 1949 to 1950 he was a member of the People's Chamber and from 1949 until his death President of the GDR Land Chamber . From 1950 to 1955 Lobedanz was a member of the Political Committee of the Eastern CDU. At the end of 1952, however, he withdrew from the Schwerin district board due to excessive work. In 1954 he was awarded the GDR president Wilhelm Pieck the Patriotic Order of Merit of the GDR in gold. Lobedanz was one of the first 22 people to receive this newly founded order.

Reinhold Lobedanz appeared very indulgent to the KPD / SED and the Soviet occupying power in Mecklenburg-Western Pomerania. Through his cooperation course, he saved the regional association from too great a fault, but led it deeper and deeper into the waters of the SED. Anyone who rebelled against it, such as the parliamentary group leader in the Schwerin state parliament Werner Jöhren , his deputy Karl Heinz Kaltenborn or the economics minister Siegfried Witte , was eliminated.

As the state chairman of the CDU Mecklenburg-Western Pomerania, Lobedanz was involved in the removal of both Andreas Hermes and Jakob Kaiser . He did not resist the pressure to bring the SED and SMAD into line and let the Soviets exploit him against the party leadership. Lobedanz was largely responsible for the wave of purges and arrests in the state party after 1950. As chairman of the central committee of inquiry, he also ensured the exclusion of unpleasant members who did not want to go along the path of adjustment.

President of the Land Chamber of the GDR