State election in Baden-Württemberg in 2021

The election for the 17th state parliament of Baden-Württemberg took place on March 14, 2021, the same day as the state elections in Rhineland-Palatinate and the local elections in Hesse .

The election winners Bündnis 90 / Die Grünen around the previous Prime Minister Winfried Kretschmann received 32.6 percent of the vote. Their share was higher than ever before in a state election in Germany, while the previous coalition partner CDU achieved its lowest result in the country with around 24.1 percent, as did the opposition SPD , which, however, was able to regain third place. The AfD recorded the most significant loss of votes and is now the smallest party in the state parliament. 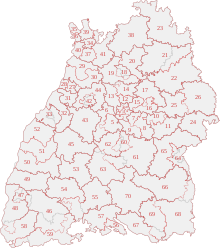 In contrast to the other federal states, there are no state lists and no second vote in Baden-Württemberg. A party cannot therefore offer its top politicians any safe list positions. In order to move into parliament relatively safely, they must therefore run in at least one of the 70 constituencies - preferably in those that are considered party strongholds - and for this they have to be set up by the party members resident there.

With this “personalized proportional representation without lists”, the voters vote for a direct candidate and his party at the same time - provided he does not run as a single applicant, for which 75 (previously 150) signatures are required. An election proposal can also contain a replacement candidate who, if necessary, moves into parliament as a successor.

The respective winners of their constituencies move directly into the state parliament with a direct mandate (first mandate). In addition, second mandates are allocated so that the distribution of seats reflects the ratio of votes for the parties. Only those parties that receive at least 5% of the votes are taken into account. The seats within a party are distributed regionally to the four administrative districts (Freiburg, Karlsruhe, Stuttgart, Tübingen) in descending order of the proportion of votes .

To ensure these relationships are in process Schepers Sainte-Laguë / where appropriate overhang seats awarded. As a result, the state parliament grew from a nominal 120 seats to 143 in 2016, whereby some constituencies are only represented with the first mandate, while others are represented by two, three or four members ( Heilbronn state constituency ).

Criticism and change as a result of the corona pandemic

Some small parties criticized the right to vote in state elections because of the corona pandemic . It provided for over 10,000 support signatures across the state. The left announced that the election would be challenged if the conditions were not adapted to the pandemic. The pirate party called the petition committee of the state parliament and demanded that the signatures be suspended. The Free Voters also saw their participation in the state elections at risk. The state election committee recommended hygiene measures for deployment meetings during the pandemic.

An alliance of several small parties filed a lawsuit in mid-September 2020 with the aim of reducing the number of support signatures required. On November 9, 2020, the Constitutional Court for the State of Baden-Württemberg ruled the plaintiff. On November 12, 2020, the state parliament decided, with the consent of all parliamentary groups, to halve the number of necessary signatures to 75 per constituency.

The red-green coalition in the Prime Minister Winfried Kretschmann Vice end Greens were more than 30 percent for the first time the strongest party in a state election in Germany. The CDU and SPD suffered significant losses, the SPD only became the fourth strongest force and lost its participation in the government.

In addition to the Greens, the clear winner of the election was the AfD party , which appeared for the first time and immediately reached over 15 percent and became the strongest opposition party. The FDP gained slightly, while the Left clearly missed its entry into the state parliament.

The two strongest parties formed the first green-black “kiwi coalition” of the Greens at state level, with the CDU as a junior partner. The government initially held 89 of the 143 mandates in the state parliament, the Kretschmann II cabinet was sworn in on May 12, 2016.

Parliamentary groups before the election

The AfD parliamentary group originally had 23 members, of which 15 remained due to resignations and an expulsion. A former AfD member later joined the CDU parliamentary group; seven MPs are non-attached. This made the SPD the third largest group ahead of the AfD.

Nominations for election had to be submitted to the respective district returning officers by January 14, 2021. Parties that are not represented in the state parliament had to submit 75 support signatures for each district nomination (for a nationwide run in all 70 constituencies, at least 5,250 support signatures (70 * 75)).

A total of 21 parties with a total of 872 candidates and eight individual applicants competed. According to the results of the 2016 elections, these were in alphabetical order for new parties on the ballot paper:

Coalition statements before the election

The FDP, with its state chairman Michael Theurer and its top candidate Hans-Ulrich Rülke, signaled its readiness for a green-yellow coalition as early as 2019 . Rülke also held out the prospect of continuing a coalition led by the Greens with the election of a successor to Prime Minister Winfried Kretschmann . Andreas Stoch said before the state elections that the SPD would fight for a green-red coalition or a traffic light coalition and would not be interested in working with the CDU.

As a rule, the survey institutes only give values ​​for parties that are currently represented in parliament and those that come to a share of at least three percent in the respective survey. 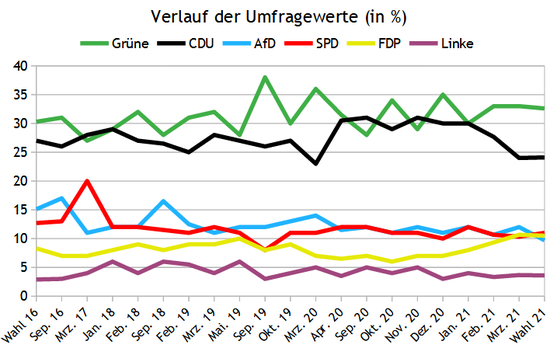 Survey values ​​averaged over monthly survey results, from the 2016 election to the 2021 election

The values ​​of the surveys reflect the opinion of the respondents as to which of the surveyed coalitions they rate as positive or negative. The missing values ​​for 100% did not provide any information.

Majorities of votes in the constituencies

Elections to the state parliament of Baden-Württemberg