The colors of a traffic light

The traffic light coalition is the name given to the cooperation of three political parties to form a government majority. Based on the original meaning of the coalition of a social democratic or socialist , a liberal and a green party, the term has developed a few variants.

With traffic light coalition is in Germany usually a ruling coalition of parties SPD , FDP and Alliance 90 / The Greens called because the traditional colors of these parties the colors of a traffic light match (red-yellow-green).

Volker Wissing , Michael Kellner and Lars Klingbeil with the signed coalition agreement on December 7, 2021 in Berlin.

At the federal level , such a constellation first came about on December 7, 2021, at the state and local level there were already examples of such coalitions before.

After the traffic light coalition at the federal level was not a seriously considered option for forming a government for a long time, coalition negotiations between the three parties took place for the first time as a result of the results of the federal election in 2021 . On November 24, 2021, the SPD, Greens and FDP agreed on the coalition agreement for the 20th parliamentary term of the Bundestag . After the approval of the bodies of the SPD and FDP and the members of the Greens, the Scholz cabinet was elected in a traffic light coalition on December 8th .

The government coalition that existed in Brandenburg from 1990 to 1994 was referred to as the traffic light coalition , although the Greens had failed at the 5% hurdle and instead coalition 90 co-governed. Bündnis 90 merged with the Greens to form Bündnis 90 / Die Grünen in 1993, but not all of the faction members of Bündnis 90 joined the new party. The coalition broke up in February 1994 six months before the regular state elections due to differences of opinion over the assessment of the role of Prime Minister Manfred Stolpe in his function as Consistorial President of the Evangelical Church of Brandenburg during GDR times.

A real traffic light coalition governed from 1991 to 1995 in Bremen . This coalition was also terminated a few months before the regular election date . The reason for this was the so-called birdie affair .

Some attempts to form such a coalition failed. This was the case after the election to the Berlin House of Representatives in 2001 . Exploratory talks in this direction after the state elections in North Rhine-Westphalia in 2010 were also unsuccessful.

Furthermore, traffic light coalitions at federal and state level were repeatedly rejected by the FDP and in particular by Guido Westerwelle with reference to the different party programs of the SPD and the Greens on the one hand and the FDP on the other. 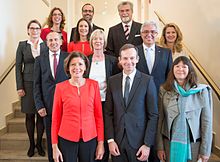 Prime Minister of Rhineland-Palatinate Malu Dreyer with her ministers on May 18, 2016 in the State Chancellery.

After the vote in the Rhineland-Palatinate state elections in 2016 was not enough for a continuation of the Red-Green coalition, but a black-yellow coalition was also unable to achieve a majority and Malu Dreyer found a grand coalition as the "last resort", the SPD agreed, FDP and Bündnis 90 / Die Grünen on the formation of the first traffic light coalition in Rhineland-Palatinate. With the swearing-in of the second Dreyer cabinet , this coalition took office on May 18, 2016. It was the first traffic light coalition at the state level, which lasted the entire electoral period until the next state election and in which all parties involved were again represented in the state parliament after the next election. After the state elections in Rhineland-Palatinate in 2021 , Malu Dreyer announced that he would start coalition negotiations with the aim of a new edition of the traffic light coalition. The government was re-elected; the Dreyer III cabinet was sworn in on May 18, 2021.

An analogous constellation after the Lower Saxony election in 2017 was eliminated due to the clear rejection of the FDP, which is why the SPD had to form a grand coalition with the intensely fought rivals of the CDU. In Schleswig-Holstein , too , a traffic light coalition, which was less realistic due to the SPD's second place, but long preferred by the Greens, had not come into being after explorations with the FDP, so that there was a Jamaica coalition under leadership there, which until then was still seldom discussed in Germany the CDU was formed.

Following the state elections in Hesse in 2018 , exploratory talks failed after the final election result confirmed that the Greens, with Tarek Al-Wazir as the strongest coalition partner in a traffic light coalition, could claim the office of Prime Minister. A possible alliance with a Prime Minister of the Greens was described by the media as the Green Traffic Light in the context of the election .

At the municipal level there was a traffic light coalition in Bonn from January 2006 to September 2006 , and from July 2006 to June 2009 in the independent city of Darmstadt .

Other names for the traffic light

Such a traffic light coalition by Fritz Goergen was first referred to as the "Africa coalition" in the Financial Times Deutschland in July 2006 because of the green, yellow and red colors of Africa . The green politician Jürgen Trittin suggested in September 2006 that we speak of a Senegal coalition instead . The national flag of the West African state includes the colors green, yellow and red, with a green star on the middle, yellow stripe.

A coalition of CDU , FDP and Bündnis 90 / Die Grünen is sometimes referred to as a black traffic light ( Schwampel for short ), but more often as a Jamaica coalition . Such a government coalition was first implemented in the history of Germany above the municipal level in Saarland in 2009 , but failed after two years. They have existed in Schleswig-Holstein since 2017 . Immediately after the 2005 Bundestag elections , it was discussed; after the 2017 Bundestag elections , there were exploratory talks between the CDU, FDP and the Greens, but the FDP ended them after four weeks.

After the state elections in 2012 , the SPD, Greens and SSW ruled in Schleswig-Holstein in a red-green-blue coalition that became known under the - sometimes controversial - catchphrase Dänen-Ampel . It was later called the Coastal Coalition .

In Austria was in the 1990s based on the concept formation in Germany under traffic light coalition , a coalition of Social Democrats , Liberal Forum and Green discussed, although the party color of the Liberal Forum did not yellow , but light blue was. After the state and municipal council elections in Vienna in 1996 , such a variant became mathematically possible, but the SPÖ preferred a presumably more stable two-party coalition with the ÖVP. The loss of importance of the Liberal Forum when it left parliament after the National Council elections in 1999 was followed by a merger in 2014 into the new liberal party NEOS - The New Austria and Liberal Forum . Their party color is pink, however.

The Innsbruck government, in office from 2012 to 2015, from the bourgeois-liberal list for Innsbruck (identification color yellow), the Greens and the SPÖ is also understood as a traffic light coalition . This came about after the 2012 municipal council election .

In Luxembourg, a coalition of Social Democrats , Liberals and Greens is called the Gambia Coalition because the party color of the Liberal Democratic Party is blue, not yellow. Red, blue and green are the national colors of the Gambia . Such a coalition was formed after the 2013 chamber election under Prime Minister Xavier Bettel . After a long time, a government succeeded again to the exclusion of the previously dominant Christian Democrats , who were involved in all post-war governments with the exception of a four-year break in the 1970s and are still the strongest party.

In England, the term traffic light coalition is understood to mean a coalition including the Labor Party , the Liberal Democrats and the Green Party of England and Wales , which, for example, represent the majority parliamentary groups in the City Council of the English administrative district City of Lancaster . A comparable coalition in Scotland between Labor, Liberal Democrats and the Scottish Green Party was discussed after the elections to the Scottish Parliament in 2003, but did not materialize.

Belgium and the Netherlands

In Belgium and the Netherlands, liberal parties ( VVD or VLD and MR ) are associated with the color blue. After the mixed color of red and blue, coalitions of social democrats and liberals are called “purple government” (paars kabinet) . If the Greens and / or the left-liberal Democrats 66 (whose identification color is also green) are added, there is talk of pairs-large (“purple-green”), pairs-plus or “ rainbow coalition ”. A "purple government" made up of the Labor Party , VVD and D66 ruled the Netherlands from 1994 to 2002 under Wim Kok , which was the first time since 1945 that no Christian Democrats were involved in the government. After the parliamentary elections in 2010 , a couple-plus coalition including the GroenLinks was explored, but it did not materialize.

In Belgium, Liberals, Socialists and Greens ruled from 1999 to 2003 (which are again divided into a Flemish and a Walloon party; first cabinet Verhofstad ), this was the first time since 1958 that the Christian Democrats were expelled into the opposition. From 2003 to 2007 a "purple government" followed without the Greens ( Verhofstadt II ).

After the difficult circumstances after the 2018 Reichstag elections in Sweden , in which neither the liberal-conservative Alliansen nor the red-green alliance achieved a majority, Stefan Löfven formed a minority government consisting of the social democratic SAP and the green MP , which was supported by the socialist Vänsterpartiet ( V), the liberal Liberalerna (L) and the rural, green- liberal Centerpartiet (C) is tolerated. This agreement was occasionally referred to as “traffic light” in the German-language press, although the party color of the Swedish Liberals is blue rather than yellow.