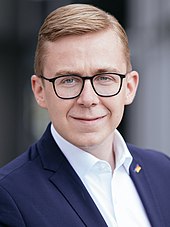 Philipp Amthor (born November 10, 1992 in Ueckermünde ) is a German politician ( CDU ). He has been a member of the German Bundestag since the 2017 federal election .

Philipp Amthor grew up in Torgelow with his single mother, a trained toolmaker who worked as a coach in a call center . His father, a soldier, left the family early. In his childhood he spent a lot of time with his grandparents.

In 2011 Amthor obtained his Abitur at Greifen-Gymnasium in Ueckermünde . From 2012 to 2017 he studied at the University of Greifswald law . He was supported by a grant from the Konrad Adenauer Foundation . He passed the first legal examination with distinction .

In the summer of 2018, Amthor passed the hunter examination. In December 2019, he joined the Roman Catholic Church with his baptism . In June 2020 he was appointed to the Diocesan Council , the highest lay representation of Catholics, of the Archdiocese of Berlin .

Amthor in the German Bundestag, 2019

Within the CDU, Amthor counts himself among the conservative wing. He positions himself against gender mainstreaming , against abortion and campaigns against the introduction of same-sex marriage . In 2016 he was also a co-initiator of the “Conservative Circle” in the CDU Mecklenburg-Western Pomerania .

In the federal election 2017 candidate Amthor in the constituency Mecklenburg Lake District I - Vorpommern-Greifswald II . He received 31.2% of the first votes ( Enrico Komning (AfD) 23.5%; Toni Jaschinski (left) 19.1%) and won the direct mandate . In the 19th electoral term he is the second youngest member of the German Bundestag and the youngest to have won a constituency. Amthor is a member of the Interior and European Committee as well as of the non-partisan European Union Germany . In 2018 he was elected treasurer of the Junge Union and is thus a member of its federal board.

At the beginning of 2020, Amthor declared his candidacy for the office of state chairman of the CDU Mecklenburg-Western Pomerania to succeed Vincent Kokert . After the State Minister of Justice Katy Hoffmeister renounced her candidacy on June 9, 2020, Amthor was the only applicant for this post, which is also related to the top candidacy in the state election in 2021 , until she was involved in a lobbying affair . After a meeting of the state executive on June 19, 2020, Amthor drew conclusions from the allegations against himself and withdrew his candidacy.

Amthor reported to the Bundestag that he was working as a paid sideline job, among other things, as a freelancer for the business law firm White & Case in Berlin and a supervisory board position at the US corporation Augustus Intelligence , which allegedly develops technologies such as artificial intelligence and face recognition , but has no product, no customers and no sales.

In March 2020, Der Spiegel reported on Amthors supervisory board position at Augustus Intelligence and described his role there as "opaque". The information on his function in the company, which must be published to the Bundestag, did not contain any information on his remuneration . When asked by the magazine, Amthor said that he was receiving no salary, but "the right to acquire stock options aimed at a future date ". In June 2020, Der Spiegel specified that Amthor held at least 2,817 stock options from Augustus Intelligence and was a member of the Board of Directors there from May 2019 . According to Handelsblatt, these options would have been worth up to $ 250,000. As early as October 2018, he campaigned for political support for the company on official letter paper from the Bundestag to his party friend and Federal Economics Minister Peter Altmaier . Amthor arranged at least two meetings between the company and the then Parliamentary State Secretary of the Federal Ministry of Economics , Christian Hirte . According to Spiegel , Amthor traveled to New York City , Corsica and St. Moritz to meet with other Augustus representatives . Contacts with the former President of the Office for the Protection of the Constitution, Hans-Georg Maaßen , the investor François von Finck and the CSU politician Karl-Theodor zu Guttenberg , who are also connected to Augustus, became known. Amthor has now described this sideline as a “non-executive function that is not associated with any regular workload”. After the publication of these details on June 12, 2020, he declared his part-time work ended and described it as a "mistake".

In addition, Amthor left the Bundestag investigative committee into the Amri case after demands from the parties SPD , Bündnis 90 / Die Grünen and Die Linke , before which the former President of the Federal Office for the Protection of the Constitution, Hans-Georg Maaßen, is to be questioned. Amthor's impartiality has been called into question because of their shared relationship with the company. Amthor was also criticized within the CDU. Amthor also wants to put the sideline activity for the commercial law firm White & Case on hold because it is connected to Augustus Intelligence. As a result of the affair, Amthor also withdrew his planned candidacy for the CDU state chairmanship in Mecklenburg-Western Pomerania .

Transparency Germany described Amthor's behavior, which sparked that lobbying affair, in June 2020 as "politically questionable"; it creates "the impression of marketability"; In addition, the question arises whether the “wrongdoing could also be criminally relevant from the point of view of the bribery of mandate holders ”. The lobby control organization also joined the suspicion that it could be bought . However, after Amthor had received a criminal complaint for bribing a mandate holder and accepting pecuniary benefits against Amthor, the General Public Prosecutor in Berlin announced in July 2020 that their examination had not revealed any initial suspicion and that the proceedings were therefore discontinued without investigation. The Bundestag also discontinued the review process in August 2020 because no evidence of legal violations was identified.