Eduard Adolf von Randow (born August 15, 1828 in Schweidnitz , Province of Silesia , † March 9, 1911 ) was a German sculptor , banker and member of the state parliament of the Rhine province . 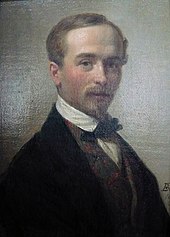 Eduard Adolf von Randow felt the urge to become an artist at an early age and trained as a sculptor. At the age of 23 he went to Rome in 1851 , where he joined the German Art Association founded there in 1845 . There he met the then 16-year-old Elisabeth von Beckerath in 1854, the daughter of the banker and councilor Hermann von Beckerath , whom he married in Krefeld on May 19, 1857. He bought his father's approval by training as a merchant and banker.

In 1861, Randow became a personally liable partner in the von Beckerath-Heilmann banking house alongside his father-in-law . After the death of his father-in-law, Adolf and his partner, the banker Gustav Heilmann, continued to run the business. The collapse of a company in Oberhausen that had taken out a major loan from von Beckerath-Heilmann led to the liquidation of the bank on August 8, 1901.

Adolf von Randow was a respected citizen of Krefeld. From 1868 to 1880 he was initially a supplementary judge, then a judge at the Krefeld Commercial Court . In 1895/96 he was deputy chairman of the Krefeld Chamber of Commerce , in 1883 co-founder and board member of the Krefeld Museumsverein and from 1888 its treasurer and finally an honorary member. He belonged to the board of trustees of the Kaiser Wilhelm Museum and was a member of the Krefeld “Kränzchen für Höheres”.