The former Potsdam Garrison Church on a painting from 1827 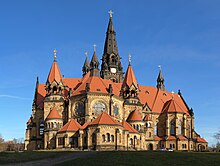 St. John's Church in Altona , formerly served as the garrison church of the Infantry Regiment "Graf Bose" (1st Thuringian) No. 31

Franciscan Church in Ingolstadt , garrison church from 1837 to 1945

The Mürwiker Christ Church at the Flensburg-Mürwik base , which was built in 1958.

A garrison church is a church building that was erected for the military ( garrison ) stationed on site or at least temporarily used by them. It is sometimes also written as a garrison church or referred to as a military or local church .

At the beginning of the 20th century, churches in larger garrison towns in Germany were built for the military stationed there, or existing churches were used as such. The churches were often owned by the state.

After the Second World War , the garrison churches , as far as they had survived the bombing war , continued to be used by local parishes.

Derived from the tradition of mercenaries whose troop own political communities were, the members formed a regiment from the 18th century own parishes whose church records from the field preachers were performed. With the expansion of the armies from the 19th century onwards, the military chaplains were responsible for larger units or individual garrisons. It was independent of the respective civil parish. It was directed by a garrison pastor. This was appointed in Württemberg by the king and installed by the bishop. The parish was also assigned a garrison sexton. From the ecclesiastical side, it was viewed as a personal parish.

A separate cemetery was even laid out for the Württemberg Honorary Invalid Corps .

The Bundeswehr and Austria have their own military parishes , often location-based for the soldiers at the respective location and their families. In many cases, the parish churches of the local parish are also used.