The Catholic Church of St. Peter and Paul is centrally located in downtown Potsdam and closes off Brandenburger Strasse to the east, at the western end of which is the Potsdam Brandenburg Gate . The current church building was completed in 1870 and served both the Potsdam parish (which is now part of the Archdiocese of Berlin ) and the Catholic soldiers stationed in the city. It has had the status of a provost church since 1992 .

With the establishment of the royal rifle factory by the Prussian King Friedrich Wilhelm I with the locations Potsdam and Spandau from 1722, skilled workers were recruited, mainly from the arms factories of the Catholic city of Liège in Belgium . They only wanted to move to Protestant Prussia if they were guaranteed free religious practice, including a pastor in their language and his support. By royal decree of 1722 they were assured of this, as well as the right to keep a few cows. However , the king had refused the request to be able to brew his own beer . Around 200 people - around 26 masters and several journeymen with their families - finally arrived, accompanied by the Dominican Father Ludovicus Belo (Belau) from the convent in Wesel . Belo was a pastor in Potsdam between 1720 and 1731, and in Spandau from 1722 to 1727. Until the dissolution of the monasteries as a result of secularization around 1810, it was Dominicans, then diocesan priests who belonged to the diocese of Wroclaw from 1821 . The Dominican settlement formed a mission station that was subordinate to the Vicariate Apostolic of the North . With the bull De salute animarum , Pope Pius VII undertook a reorganization of the dioceses and church provinces in Prussia in 1821 as part of the re-registration of the Catholic dioceses in Germany after the Congress of Vienna ; Potsdam passed from the Apostolic Vicariate of the North to the Prince-Bishop's Delegation for Brandenburg and Pomerania of the Diocese of Breslau and became a parish.

On the science, the Catholic church services for the armaments workers were initially held in a hall of the City Palace, to the initiative of the Dominican Father Raymond Bruns a baroque predecessor of the present church was built, that of Frederick William I financed and 1738 by Bruns benediziert was. The church bore the patronage of Saints Peter and Paul . It did not have a tower and was located on the premises of the Royal Rifle Manufactory. The altarpieces by Antoine Pesne , which still exist today, were created for this church . The church in Potsdam and the church on the rifle plan in Spandau, built in 1723/24, were the first newly built Catholic churches in Prussia after the Reformation; construction of the Hedwig Church in Berlin began in 1747.

After more than a hundred years of use, this church was no longer sufficient and dilapidated for the steadily growing parish. As early as 1856 , August Stüler supplied plans for a new building , which were further developed by Wilhelm Salzenberg after his death . Instead of the double-towered west facade planned by Stüler, he added the bell tower designed according to the Italian model . He changed the chancel of the church from Stüler's semicircular apse to a conclusion consisting of three conches , which is based on the Hagia Sophia .

On the newly acquired area, embankments and wells had to be dug for drainage in order to guarantee the necessary stability. Albert Badstübner took over the construction management.

The ceremonial laying of the foundation stone took place on June 4, 1867 under the archpriest Franz Xaver Beyer. The building was completed on August 7, 1870, and Provost Robert Herzog authorized it.

Towards the end of World War II , the Church of St. Peter and Paul suffered damage to the windows and roof. The restoration started by the community after the end of the war ended on June 27, 1950 with the consecration .

Between 2002 and 2006, on behalf of the community, the nave, the roof and the bell tower were repaired in four construction phases under the direction of the engineering office Wolfgang Stich.

The architectural style of the church is eclectic . There are Byzantine and Romanesque , in the interior classicist used styles. The most striking feature of the yellow brick building is the 64 meter high Italian bell tower, which is modeled on the campanile of San Zeno in Verona, Italy . In his gallery there are three bronze bells with the names "Maria", "Peter and Paul" and "Benedict".

The apostles Peter and Paul rise above the main portal , in the middle there is Mary with the Christ child .

The plan of the church is in the shape of a Greek cross and has external dimensions of about 65 meters by 38 meters.

The main nave with a view of the altar apse

Altar and side altars

In the lavishly designed interior, three paintings from the previous building are preserved, created by court painter Antoine Pesne , an important baroque and rococo artist: the former high altar picture The Fear of Christ and the two pictures of the former side altars, the rosary is presented to St. Dominic and Guardian Angel . Today's high altar made of marble with the tabernacle has a wooden structure with a dome ciborium and is located in the central conche of the apse. In the other two conches there are side altars with the paintings of the former side altars. The marble folk altar has moved in front of the triumphal arch , on which there is a statue of Mary on the left and a Sacred Heart on the right.

In the side niches in front of the triumphal arch are the entrances to the sacristy and the parish library as well as the stairway to the pulpit. In the left aisle there was an altar dedicated to the " Sorrowful Mother of God ", in the place of which there is a Pietà again today. The altar of the right aisle is the reconstructed former high altar with Pesne's agony of Christ . Fourteen carved Stations of the Cross from the time the church was built hang on the walls of both aisles . 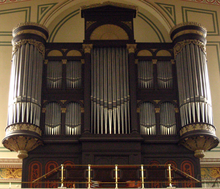 On the gallery is an organ made in 1936 by the Alexander Schuke company with 41 stops . The instrument has electric pocket drawers and was used by Johanna Schell for 37 years. The disposition is as follows:

In the entrance area under the organ gallery there is a painted baptismal font, which is positioned as a holy water font in front of the aisle. Next to the right side entrance is the baptismal font used today with the depiction of the baptism of Jesus by Otto Hitzberger . It is the former font of the St. Antonius Church in Potsdam-Babelsberg , which was moved here around 1966. An embroidered portrait of the Virgin Mary invites you to quiet contemplation under the gallery. There is a pulpit next to the altar apse . On both sides above the altar apse, marble figures of Saints John and Matthew are arranged in wall niches. All wall surfaces are painted in colorful ornamentation .

The parish of St. Peter and Paul

The Catholic parish has over 6100 members. In addition to holding divine services such as baptisms, weddings, Eucharistic celebrations, etc., religious instruction and pastoral care, a public library, the St. Peter and Paul day care center , an old people's home and - together with the Alexians - the St. Joseph hospital are maintained.