Field side by Georg Christian Unger 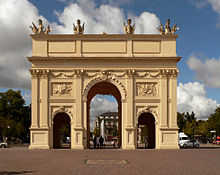 City side by Carl von Gontard

The Brandenburg Gate on Luisenplatz in Potsdam was built in 1770/71 by Carl von Gontard and Georg Christian Unger on behalf of Friedrich II . It stands at the western end of Brandenburger Strasse , which runs in a straight line to the Church of St. Peter and Paul . It is one of the three preserved city gates of Potsdam.

Earlier, in 1733, there was another, simpler gate in the same place, which resembled a city ​​gate . Together with the city wall, a kind of customs wall or excise wall , and the other gates, it was supposed to prevent desertion and smuggling .

Towards the end of the Seven Years' War , Frederick the Great had the old gate demolished and a new one, the Brandenburg Gate, built as a symbol of victory. For this reason, the Brandenburg Gate also looks like a Roman triumphal arch. The Arch of Constantine in Rome served as a model . The Roman influence in the architectural style can be recognized, among other things, in the Corinthian double columns and in the strong cranked entablature.

Characteristic of the Brandenburg Gate are its two completely differently designed sides, which go back to two architects: Carl von Gontard designed the city side, his student Georg Christian Unger the field or country side. Gontard designed the city side as a plastered facade with Corinthian pilaster strips and trophies , Unger designed the field side based on the Arch of Constantine with Corinthian double columns and decorations such as the golden trumpets. The two side passages for pedestrians were only added in 1843 under Friedrich Wilhelm IV in order to cope with the increased traffic.

At that time you had to pass the Brandenburg Gate if you wanted to go to the city ​​of Brandenburg , hence the name. The gate leads the hiker over the inner-city pedestrian zone Brandenburger Straße in an easterly direction to the Peter and Paul Church .

Since the demolition of the city wall around 1900, the Brandenburg Gate has been a free-standing structure.