Saul received his primary school education from his father. He was taught both the Talmud and non-theological subjects. At the age of twenty, Saul Berlin was ordained a rabbi . In 1768, at the age of 28, he became a rabbi in Frankfurt (Oder) .

From Frankfurt (Oder) he often traveled to Berlin and Breslau (where he visited his father-in-law). There he came into personal contact with representatives of the Jewish Enlightenment ( Haskala ) and secretly became one of their most enthusiastic followers.

Saul Berlin began his literary career with the anonymous circular Ketav Josher (German: Eine Epistle der Gerechtigkeit; published in Berlin 1794, after the author's death), which Hartwig Wessely defended warmly in his own dispute with the rabbis when he asked for a German-speaking one Education of the Jews pleaded. Berlin used humor to describe what he viewed as the absurd methods of the Jewish schools and deplored how the rabbinical casuistry , which made up the bulk of the subject matter, violated the common sense of the students and killed the most honorable aspirations.

Saul Berlin later wrote the work Mitzpeh Yekutiel (German: Der Wachturm von Jekutiel) (published by David Friedländer and his brother-in-law Itzig, Berlin 1789) under a pseudonym , a polemic against Torat Jekutiel by Raphael Kohen . The latter was one of the most ardent advocates of rabbinical piety and a rival for Levin in the bid for the Berlin rabbinate, with Levin's son moving to portray Raphael Kohen as a negative example of rabbinism.

Under the name “Ovadiah b. Baruch from Poland ”, Saul Berlin tried in this work to ridicule Talmudic studies and to portray one of its best-known representatives as ignorant and dishonest. The publishers claimed in the foreword that they had received the work from a traveling Polish Talmudic scholar and that it was their duty to print it and submit it to the judgment of specialists. To ensure anonymity even more, Saul Berlin and his father were listed among those who should receive it. Saul Berlin's statements, particularly his personal attacks on those with whom he disagreed, undermined his cause. When the work arrived in Altona and Hamburg, where Raphael Kohen was head rabbi, the work and the author were banned. The subsequent discussion about the validity of the ban revolved exclusively around the question of whether personal attacks such as that on the Rabbi von Altona justified such a punishment.

Some Polish rabbis supported the ban, while others considered the ban to be invalid, including Ezekiel Landau , Grand Rabbi of Prague and a close friend of Saul Berlin, who urged him to identify himself as an author. 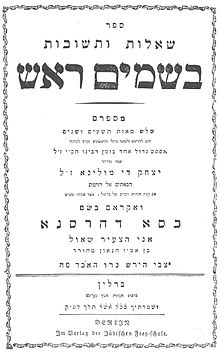 Before the excitement surrounding this affair had subsided, Saul Berlin caused a new sensation with another work. It was the script Besamin Rosh ( Hebrew בשמים ראש 'The Scent of Spices' , printed 1793 in Berlin). There were 392 responses ( responsa ), allegedly by Asher ben Jehiel came. There were many glosses and comments in it, which he called Kassa de-Harsna (German: fish farm). Berlin, for example, said in No. 257 that an insight into the fundamentals of the Torah and its instructions could not be obtained directly from it or from the traditions, but only through a philosophical-logical training from non-Jewish sources. However, Asher ben Jehiel had condemned the study of philosophy and even the natural sciences as non-Jewish and harmful (compare No. 58 from Asher's real responses). Besamim Rosh attributes the following opinions to the thirteenth century Neo-Talmudists: “Contributions of the faith [creed] must be adjusted over time; and right now the most important point is that we are all worthless and depraved and that our only duty is to love truth and peace and to know God and his works ”. Rabbi Asher is also accused of being the author of two responses to adjust the ceremonial rights, especially because they were viewed as a burden by Saul Berlin in his youth. For example, it should be allowed to shave (No. 18), drink non-kosher wine jajin nesek (No. 36) and travel on the Sabbath . Saul Berlin caused a storm of indignation by fraudulently using the name of one of the most famous rabbis of the Middle Ages to fight rabbinism.

Mordecai Benet first tried to prevent the book from being printed in Austria and then, in a circular to Saul Berlin's father, accused Saul Berlin of the deception by critically analyzing the answers and arguing that they were forged. Hirschel Levin tried in vain to defend his son. Saul Berlin resigned his office as rabbi to end the dispute and went to London, where he died a few months later. In a letter found in his pocket, he warned anyone not to look on his papers but requested that they be sent to his father. He expressed a desire not to be buried in a cemetery but in a lonely place, in the clothes in which he had died. The exact historicity of Besamin Rosch is still debated as it is still unclear which parts are fake.

To understand his unique personality, that Saul Berlin was a focal point for the rays of a declining period in Jewish history. As a great expert on the Talmud, he knew how to attack rabbinism. He burned with the need to lead his people into spiritual freedom. Mendelssohn and Wessely's tentative attempts to usher in a new era did not satisfy him. In his youthful exuberance, he failed to understand that developing a popular understanding is a slow process. Open competition for his idea would have meant a break with his father, wife and children - in short, with all of his relatives; and it was doubtful whether his sacrifices would have served his ends. His anonymous and pseudonymous authorship was a matter of politics; not from cowardice. However, he could not escape the consequences of this kind of martial arts. It is humiliating and bitter to secretly attack those who have to be approved in public. Although Saul Berlin got personal in his polemics, he was nervous and dissatisfied with himself and the world, knowing that he was being misunderstood because of his own mistakes.

In addition to the above-mentioned writings, Saul Berlin is said to have written a large number of rabbinical works, including notes on the entire Talmud.