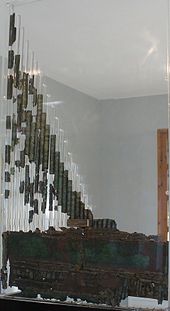 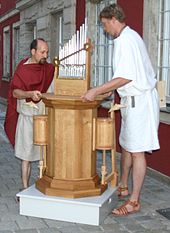 Reconstruction of a Roman organ

The hydraulis (also hydraulicos or water organ , "water aulos ") is an organ-like keyboard instrument that was widespread in the Roman Empire . A characteristic feature is the air supply with a hydraulic principle, in which an even air pressure is maintained by water. The organs usually had several rows of pipes that could be registered individually.

Smaller organs from around the 2nd century AD, which received the air supply through bellows, were still called hydra , but were no longer water organs .

Antique water organ, mosaic in the Roman villa in Nennig on the Saar, based on the hydropneumatic principle. Forerunner of the hydraulic accumulator.

These water organs were common in the Roman Empire. The Greek inventor Ktesibios said it was in the late 3rd century BC. In Alexandria .

They were mentioned by the Roman author Vitruvius in the 1st century BC. With Heron of Alexandria in the 1st century AD, and with Iulius Pollux in the 2nd century. However, he already reported on smaller organs, which now received air supply with bellows, while larger instruments continued to function according to the hydraulic principle. In some of the mosaics and other illustrations there are representations of organs and their players.

The instruments were used by noble citizens for domestic music, they were common in gladiator fights and in theaters.

The oldest surviving parts of a Roman organ are from the 1st century BC. In Dion in Greece ( Dion's water organ ), others in Aventicum (Avenches) in Switzerland from the 1st century AD. The organ in Aquincum in today's Budapest from the 3rd century, of which extensive remains have been found, was probably already operated with bellows air and was therefore no longer a water organ, although it was still called hydra .

During the Renaissance , water-powered organ automatons were built based on the ancient hydraulic system, for example in the Villa d'Este in Tivoli . 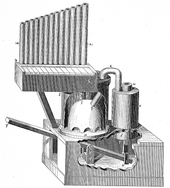 Water organ according to the description of the Heron of Alexandria

In addition to labial pipes , lingual pipes with impact or counter-hammer tongues could possibly have been used. For pipes with reeds, the word origin speaks of hydraulis (ὕδραυλις, fem.) Or hydraulos from ancient Greek húdōr (ὕδωρ), "water" and aulos (α sprichtλός), which in antiquity was usually understood to be a double reed instrument with a single or double reed. The argument is questioned because of the general meaning of aulos , "tube", which is why any wind instrument could be called aulos . Alternatively, -aulos can be traced back to aulē , "chamber", with reference to the water container. Furthermore, the pipes, which are always slender, do not indicate reeds. In addition to hydraulos , the short form hydras (ὕδρας, masc.) Is used.

With the Hydraulis, a container ( Pnigeus ) open at the bottom is immersed in a water container . Pumping forces air into the container, thereby displacing the water from the container. The water pressure keeps the air pressure in the container largely constant, even though the pumps do not generate an even flow of air. In later organs, the wind mechanism serves this purpose without water.

The same technical principle as with the Hydraulis can also be found in wet gas tanks .