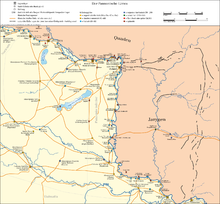 The location of Aquincum on the Pannonian Danube Limes

The ruins of the civil city (aerial view)

Aquincum is the name of the ancient Roman city that stood on the site of today's Budapest .

It was already an important city in ancient times, as documented by written and archaeological sources. It has been very well researched for a modern, overbuilt ancient city. Aquincum consisted of two settlement cores and formed a kind of twin city. There was a legionary camp with a settlement and an independent civil town to the north of it. The city was on the Danuvius ( Danube ), which at that time represented the border of the Roman Empire in this region. This also gave the city a special strategic importance.

Around the birth of Christ, the area of ​​today's Hungary was conquered by the Romans. The area of ​​the later Budapest was ruled by the Celtic tribe of the Eravisker . These had their main town here and even minted their own coins under the Romans. From 40 AD the area was then completely brought under Roman control. A military camp of the Ala I Tungrorum Frontoniana was established . The building inscription of their camp is partly preserved. In 89 a legion was moved here and a corresponding camp was set up. In the course of time, significant civilian settlements emerged around the camps. A forum was built.

Around 106 the province of Pannonia inferior was established, the capital of which became Aquincum. In 107 the future emperor Hadrian became governor in Aquincum . A governor's palace was built. Above all in the north, at some distance from the camp, a settlement center was built, which was granted city rights in 124. The place received the status of a municipality . This city was equipped with a wall, a public bath and other public buildings. In the following years two amphitheaters were built, one for the civil town and another for the military camp. In 194, the civil town was raised to colony status. In 296 Pannonia inferior was divided into two provinces. Aquincum lost the status of a provincial capital, but was still of particular importance. The civil town was abandoned during this time. A new legionary camp was built around 332. Approx. 30 years later a Christian double basilica was built in the civil town. From the end of the fourth century there was an increasing number of Germanic and Hunnic- Alanic immigrants who also settled in the area of ​​the city. Shortly after 430 Pannonia was officially abandoned by the Romans and left to the Huns. A Roman or Romanized remaining population can also be proven in the subsequent period.

The remains of the amphitheater in the civil town

The remains of Aquincum are now in the northern suburbs of Budapest and are partly well preserved and well researched because of the thinner buildings there. Remnants of Roman activities were found in almost the entire city area, but mainly to the right of the Danube. The legionary camp took up an area of ​​about 400 × 500 m. During excavations, almost all important buildings of such a camp could be archaeologically proven. In the middle stood the staff building ( Principia ). There was a spacious military bath ( Balineum ), a military hospital ( Valetudinarium ), workshops, granaries ( Horreum ) and of course the team barracks.

Above all to the east there was a camp village ( vicus ) that ran along the Danube and, with a north-south extension of more than one kilometer, had an urban character. There were public baths, temples, and a market square. The governor's palace was on an island opposite the city. In the south there was an amphitheater. In the west there were mainly craft businesses. In the north some town villas richly decorated with paintings and mosaics .

To the north of this urban center was another, somewhat smaller, civilian complex surrounded by a wall with its own amphitheater , temples and baths. This city had the status of a municipality and later that of a colony .

Among the individual finds from Aquincum , the remains of a portable organ should be mentioned. It is one of the few surviving examples from the Roman Empire. They were found in 1931 in the ruins of the fire department's association building. Only the metal parts remained, i.e. pipes, register slides, kettles and an inscription plaque that reports that the organ was donated to the fire brigade by Gaius Iulius Viatorinus.

Eduard von Sacken : The Roman baths in old furnace in the messages of the emperors. royal Central Commission for the Research and Conservation of Architectural Monuments Volume 2, 1857, (category with associated images on Commons )