Red on the red

Rot an der Rot is a municipality in the district of Biberach in the state of Baden-Württemberg in Germany .

The municipality of Rot an der Rot belongs to the Upper Swabia region and is located on the Rot River of the same name between Biberach an der Riss and Memmingen .

Confluence point at the Berg district 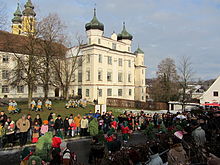 Red was first mentioned around the year 1100. In 1126 Hemma von Wildenberg founded the Rot monastery , also known as Mönchsrot , which was settled by French Premonstratensian canons. Since then, the history of the place has been closely linked to that of the monastery, which, as the first Premonstratensian settlement in Swabia and the founding of several monasteries, soon became supraregional and became directly imperial in the 15th century.

In 1803 it was secularized according to the Reichsdeputationshauptschluss and the community of Mönchsroth was renamed Rot an der Rot. Red first came to the Counts Kolb von Wartenberg and shortly thereafter by adoption to the Counts zu Erbach-Erbach , who have since called themselves Counts von Wartenberg-Roth . From 1806 the community belonged to the Kingdom of Württemberg and there to the Oberamt Leutkirch . In the following years the place lost its importance. Not until 1947 did the Premonstratensian canons return to Rot, from where they repopulated Hamborn Abbey in 1959 .

Through these incorporations, the community again reached roughly the same area as it had as spiritual territory until secularization. Thus, Rot an der Rot is one of the largest municipalities in the Biberach district in terms of area. Around 4500 people live in the entire area on a total area of ​​63.44 km². This corresponds to about half the area of ​​the city of Ulm, where 122,801 inhabitants are distributed over an area of ​​118.69 km².

The castles Dietenberg , Mettenberg and Wirrenweiler , which had been abandoned, were in the vicinity of Rot .

The local council in Rot an der Rot has 10 members. The local elections on May 29, 2019 led to the following preliminary final result. The turnout was 63.7% (2014: 55.1%). The municipal council consists of the elected voluntary councilors and the mayor as chairwoman. The mayor is entitled to vote in the municipal council.

Worth mentioning here is the village festival , the Red Carnival with the monastery tower and the baptism of fools and the biennial fool's jump of the local fools' guild. In addition, there is the annual Zeller parade in the suburb of Zell an der Rot .

The economy in red, the farm building of the monastery

The monastery church of St. Verena (1777–1786) with its splendidly carved choir stalls (1691–1694), which was created by Andreas Etschmann , is worth seeing . The frescoes in the nave are by Januarius Zick (1784), who had already directed the reconstruction in Wiblingen . The frescoes in the choir were created by Andreas Meinrad von Au (1780). The choir organ (1786) and the three-manual, 38-stop main organ (1792) are works by Johann Nepomuk Holzhey ; they are regularly performed in organ concerts with the local church choir St. Verena .

Norbert's youth center has been located in the convent building of the monastery since 1960.

On the grounds of the monastery, at the foot of the north side of the parish church, there is a campsite with a sanitary building sponsored by the BDKJ . Below the campground is a soccer field called the Witches Cauldron . In addition to the actual soccer field of TSV Rot an der Rot 1890 at the Abt-Hermann-Vogler-Schule, there is also the training area at the oil pump called the oil pump .

In addition, the gates of the monastery fortifications are noteworthy, as well as the economy , which was renovated only a few years ago , the farm building of the monastery and the associated mills and agriculture. On the outskirts in the Haslachtal is the cemetery church of St. Johann (1737–1741) with ceiling paintings and the high altar that are well worth seeing. The facade painting of the former flour mill of the monastery in the Spindelwag district and the fox pond created by the monks of the monastery are also worth seeing .

All architectural and artistic monuments of the municipality are recorded in the list of cultural monuments in red on the red .

In Rot an der Rot there are three (up to 2010 even four) companies that produce Euro pallets . All four started out as sawmills. The wood, the raw material for the production of pallets, is sourced from southern Germany. Although actually competitors, the companies use the slogan "Pallets made of red" to advertise to a local women's soccer team. The companies are:

As a fourth company until February 2010, the Schilling woodworks was also involved in the production of pallets. However, after a fire, pallet production was stopped there.

People associated with the place

Wikisource: Red in the description of the Oberamt Leutkirch from 1843  - sources and full texts

Districts of Rot an der Rot

Cities and municipalities in the Biberach district