This article is about the American film producer, for other people see Roberto Rodríguez . 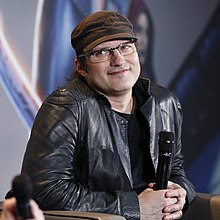 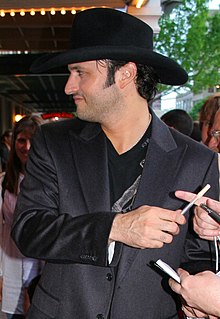 Robert Anthony Rodriguez (born June 20, 1968 in San Antonio , Texas ) is an American film director , screenwriter , film composer and film producer of Mexican origin. He has also worked as a cameraman and film editor on some of his films . Since 2013 he has had his own television station with El Rey Network .

Due to poor grades, Rodriguez was not accepted into the film class after undergraduate studies at the University of Texas at Austin . Only after winning a local film festival with a video short film was he subsequently admitted to study film. After countless video films made as a teenager, he was able to shoot on real film for the first time. His first project was the 16mm short film Bedhead in 1991 , with which he won over a dozen film awards. During the 1991 summer vacation, he made the action film El Mariachi , inspired by the films of John Woo . He borrowed the 16 mm film camera for this shoot and as an actor he hired friends and acquaintances. Since he did without a crew and did everything on set himself, a budget of only $ 7,000 was enough for him. He made some of the money, $ 3,000, testing drugs. During the 30 days at the medical institute, he not only wrote the script, but also met one of its leading actors. After shooting the film in the Mexican city of Ciudad Acuña within two and a half weeks , Rodriguez initially unsuccessfully tried to sell it to Spanish-speaking video distributors in Hollywood. After a while, however, he found a large agency that recognized the potential of the film and got him a contract with Columbia Pictures . The studio put another $ 200,000 into the film to prepare for release and submitted it to various festivals. In January 1993, Rodriguez won the Audience Award as the greatest success at the Sundance Film Festival .

Rodriguez reports on his experiences in the book Rebel Without a Crew , which aims to show young filmmakers that films are possible without a large budget. Rodriguez founded the production company Los Hooligans Productions in Texas in 1991 together with producer Elizabeth Avellan in order to produce films from then on. In 2001 the company Troublemaker Studios was added.

His next film was Desperado , a continuation of the El Mariachi story . In the film, Salma Hayek had her first appearance in a major American film.

Rodriguez worked with Quentin Tarantino , with whom he is still close friends today, on the vampire thriller From Dusk Till Dawn . In 1998 Robert then shot the horror film The Faculty with Kevin Williamson .

Rodriguez had his biggest financial success to date in 2001 with the comedy Spy Kids , to which there were three sequels. At the end of 2003 he completed the mariachi trilogy with the film Sometime in Mexico . Rodriguez shot Spy Kids and Sometime in Mexico on the HDCAM system, making him one of the pioneers in the use of digital cinema cameras . He also no longer recorded his other films on film , but digitally. Rodriguez also plays a pioneering role in the field of "3D films". The film Mission 3D and later also the film The Adventures of Sharkboy and Lavagirl was filmed and published in 3-D using the 3D process.

In 2004, while filming Sin City , Rodriguez insisted that the comic book author, Frank Miller , also be featured as a director because he found his visual style to be formative to the film. Therefore, he resigned from the Directors Guild of America , as this refuses such mentions. In 2007, Rodriguez's contribution to the double-feature Grindhouse , called Planet Terror, appeared . The other part called Death Proof was shot by Quentin Tarantino . In July 2010 appeared the Rodriguez-produced sci-fi film Predators , a continuation of the movie Predator in 1987. In 2010 Machete published.

On December 13, 2013, his television channel El Rey Network launched in the United States, which can be received by 40 million households via cable or satellite. The television series From Dusk Till Dawn: The Series, developed by him, also appeared there . The films The Jetsons , and Nervewreckers are currently announced . For the sequel to Machete , Machete Kills , he wrote the script with his brother Marcel and Kyle Ward.

For Rémy Martin and their cognac Louis XIII , he shot a short film with John Malkovich entitled 100 Years in 2015 , which is under lock and key until 2115.

Rodriguez is the guitarist of the band Chingon , which he originally founded only for the soundtrack to Sometime in Mexico . He also put together the soundtrack for Quentin Tarantino for Kill Bill 2 - for a fee of one dollar. In return, Tarantino guest-directed Rodriguez Sin City , also for a dollar.

From 1990 to 2007 he was married to the film producer Elizabeth Avellan , together they have four sons who have the unusual names Rocket Valentino, Racer Maximilliano, Rebel Antonio , Rogue Joaquin, and a daughter by the name of Rhiannon Elizabeth. Avellan was and is active as its producer. Together they run the production company Troublemaker Studios. Their collaboration began as early as 1990 in the production of the short film Bedhead , in which his ex-wife was still involved as an animator .

Rodriguez was engaged to the actress Rose McGowan until 2009 , who dedicated the chapter Destruction of her autobiography Brave to her relationship with him . There she describes him as a domineering and pathologically jealous tyrant who, among other things, demanded a polygraph test to clarify whether she was having a relationship with Quentin Tarantino. Rodriguez is a cousin of actor Danny Trejo . Trejo is a regular actor in his films, as are Rodriguez 'sisters, actress Angela Lanza and musician and actress Patricia Vonne .

In the course of the numerous allegations of sexual harassment and rape by producer Harvey Weinstein published in October 2017, Rodriguez alleged in a statement to industry magazine Variety that he had deliberately cast Rose McGowan against Weinstein's will in his film Planet Terror , but not about it because of a confidentiality agreement can speak his true reasons. McGowan reported that he was raped by Weinstein and that he was blacklisted. Rodriguez's statement, which followed an earlier statement on Deadline.com , was received critically due to a number of contradicting statements, especially since the director continued to work with Weinstein later. McGowan himself had already published a tweet in 2016 that shows Rodriguez's later portrayal in a different light.

In Scream 4 there is a reference to Robert Rodriguez: He is listed as a director in the opening credits of the fictional film "Stab".