Klein completed his training as an electrical mechanic and then began studying mathematics at the Humboldt University in Berlin . In 1976 he was with a thesis on sequential non-deterministic learning systems doctorate . From 1973 he worked at the Central Institute for Economics of the Academy of Sciences of the GDR . In the 1970s, Klein joined oppositional circles. In September 1979 he was arrested by the Ministry for State Security (MfS) in its central remand prison in Berlin-Hohenschönhausen . This was followed by a conviction of imprisonment for "unlawful connection" (Section 219 of the GDR's StGB ), which Klein served until December 1980 in the MfS's Bautzen II special prison. He was then banned from working in science and was assigned a position as a price manager at VEB Möbelkombinat Berlin .

Political-subversive engagement up to the 1989 revolution

In 1987, together with like-minded people, Klein founded the Gegenstimmen group , an association of explicitly socialist oppositionists.

“Around 600 people are assigned to the management bodies, while the so-called hard core a relatively small number of fanatical, from so-called Consciousness of mission, personal thirst for validity and the desire for political profiling by driven, often unteachable enemies of socialism. Approx. 60 people can be assigned to this category, including pastors EPPELMANN , TSCHICHE and WONNEBERGER as well as Gerd and Ulrike POPPE , Bärbel BOHLEY and Werner FISCHER ; the people RÜDDENKLAU , SCHULT , Dr. KLEIN and LIETZ . They are the main inspirers / organizers of underground political activity and, with their connections at home, to western countries and to anti-socialist forces in other socialist states, determine the specific content of the hostile activities of personal associations and their supraregional radius of action. "

- Ministry for State Security of the GDR

Work since the unification of Germany

For the United Left Klein was in the parliamentary elections in March 1990 as part of the list Association United Left Coalition set up as a top candidate. Although the list only received 0.18 percent of the vote, Klein was elected to the People's Chamber and became a non-attached MP . From October to December 1990 he represented the United Left in the Bundestag . 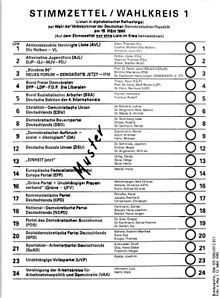 Ballot for the 1990 Volkskammer election, Thomas Klein as candidate for the United Left (List 1)

After working in the Bundestag in 1991/92 , he worked from 1996 to 2009 as a research assistant at the Center for Contemporary History Research (ZZF) in Potsdam, where he researched the history of the GDR and the GDR opposition . Klein is a member of the historical commission of Die Linke .