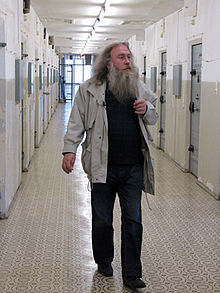 Wolfgang Rüddenklau (born May 1, 1953 in Erfurt ) is a libertarian - anarchist German journalist. He was an activist of the independent environmental movement in the GDR .

Rüddenklau, son of a pastor, refused military service in the NVA as a youth and studied theology at the Sprachenkonvikt in Berlin. After dropping out of his studies, he completed training as a child and youth worker in the church service, but was not taken on after the probationary period and from then on worked as a porter, night watchman, caretaker and cemetery worker.

Since the early 1970s Rüddenklau has been monitored by the Ministry for State Security (MfS). In 1975 he submitted an application to leave the Federal Republic of Germany, but withdrew it after approval.

In 1983 Rüddenklau was a co-founder of the Peace and Environment Circle of the Parish and Belief Church in Berlin-Lichtenberg. It was in this group that the plan to found an environmental library arose in 1985; In addition to Rüddenklau, the initiative group included Christian Halbrock , Christine Müller, Barbara and Oliver Kämper, Christian Siegert, Rainer Gremmler and Petra Thüns. In 1984 he was imprisoned in Berlin and Rüdersdorf on the pretext of criminal offenses. In the spring of 1986, the community of the Zionskirche in Berlin-Mitte made rooms available to the Peace and Environment Circle , so that the Environment Library could be founded there on September 2, 1986 , which is the most important information and communication center of the GDR Opposition should develop.

Rüddenklau, at that time also head of the men's group of the Berlin working group "Homosexual Self-Help", concentrated from 1987 on writing for the environmental sheets of the environmental library, which were renamed telegraph in 1989 . In November 1987 Rüddenklau was arrested in the course of the State Security's "trap" campaign against the illegal underground newspaper Grenzfall while printing the environmental papers and taken to the Berlin-Hohenschönhausen remand prison. The investigation initiated against him for " subversive group formation " was discontinued due to an investigation mishap and strong public protests in the GDR and in the West on the instructions of the SED leadership and Rüddenklau was released three days later. In 1988 he took part in the protests against the politically motivated exclusion of several students from the Carl von Ossietzky High School in Berlin-Pankow . A year later he protested, together with other civil rights activists, against the falsification of the election results in the GDR local elections .

In a report from June 1, 1989, Wolfgang Rüddenklau from the Ministry for State Security of the GDR is counted among the "hard core" of his opponents:

“Around 600 people are assigned to the management bodies, while the so-called hard core a relatively small number of fanatical, from so-called Consciousness of mission, personal thirst for validity and the desire for political profiling by driven, often unteachable enemies of socialism. Approx. 60 people can be assigned to this category, including pastors EPPELMANN , TSCHICHE and WONNEBERGER as well as Gerd and Ulrike POPPE , Bärbel BOHLEY and Werner FISCHER ; the people RÜDDENKLAU, SCHULT , Dr. KLEIN and LIETZ . They are the main inspirers / organizers of underground political activity and, with their connections at home, to western countries and to anti-socialist forces in other socialist states, determine the specific content of the hostile activities of personal associations and their supraregional radius of action. "

In September 1990, Wolfgang Rüddenklau organized vigils for the opening of the Stasi archives. Since the peaceful revolution in the GDR , Rüddenklau has been involved in commemorative policy work, including at the Hohenschönhausen Memorial, and publishes on the historical coming to terms with resistance and repression in the GDR. In 1999, together with Bernd Gehrke and authors from various groups of the former civil rights movements, he published an anthology on the GDR opposition with the title “That Wasn't Our Alternative”.

In October 2015, Rüddenklau and 46 other GDR civil rights activists from different political camps signed the open letter to Chancellor Angela Merkel, initiated by Katrin Hattenhauer , in which it says at the beginning:

“We support your policy of open borders. We support your refugee policy and your efforts for the sake of the people. With the greatest respect, we see your firm stance on accepting asylum-seekers in Germany [...] 70 years after the Holocaust, Germany opens its borders and saves people from need and death. "