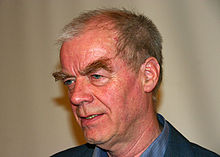 Heiko Lietz (born October 4, 1943 in Schwerin ) is a former GDR civil rights activist and politician . From 1990 to 1991 he was state spokesman for the New Forum , then until 1993 a member of the spokesman's council of Bündnis 90 and from 1993 to 1994 state spokesman for Bündnis 90 / Die Grünen in Mecklenburg-Western Pomerania .

After graduating from high school in Rostock in 1961, Lietz studied Protestant theology at the University of Rostock until 1966 . In 1967 he was arrested as a total objector , but was then a construction soldier in the NVA until 1969 . In 1969/70 he completed his vicariate in Rostock and in 1970 became pastor in the cathedral parish in Güstrow and part-time student pastor . In 1980 he resigned due to conflicts with the Church about his involvement in the independent peace movement . He then became a community worker, but was fired after four months.

When Federal Chancellor Helmut Schmidt and Erich Honecker visited Güstrow on December 13, 1981, Heiko Lietz - who was now being dealt with by the MfS as part of the OV "Zersetzer" operational process - received house arrest .

From 1981 to 1988 he worked as a housekeeper for the People's Solidarity . In 1988 he got a job as a catechist in a village parish with the church and became chairman of a working group on peace .

From 1984 onwards, Lietz prepared and coordinated the GDR-wide annual peace meeting . Meanwhile, DDR-wide labor and coordination group for military service problem , he organized and moderated to 1989 at the meetings in Berlin's Samaritan Church of Rainer Eppelmann . This group published the samizdat underground magazine “BeKenntnis”, the editor of which was Gerold Hildebrand .

In a report from June 1, 1989, Heiko Lietz from the Ministry for State Security is counted among the "hard core" of his opponents:

“Around 600 people are assigned to the management bodies, while the so-called hard core a relatively small number of fanatical, from so-called Consciousness of mission, personal thirst for validity and the desire for political profiling by driven, often unteachable enemies of socialism. Approx. 60 people can be assigned to this category, including pastors EPPELMANN , TSCHICHE and WONNEBERGER as well as Gerd and Ulrike POPPE , Bärbel BOHLEY and Werner FISCHER ; the people RÜDDENKLAU , SCHULT , Dr. KLEIN and LIETZ. They are the main inspirers / organizers of underground political activity and, with their connections at home, to western countries and to anti-socialist forces in other socialist states, determine the specific content of the hostile activities of personal associations and their supraregional radius of action. "

From 1989 he worked in the New Forum and became a member of the Republic's Speaker Council and representative of the New Forum at the Central Round Table . In May 1990 he became a member of the district council and parliamentary group spokesman in the Güstrow district and in October 1990 the first state spokesman for the New Forum in Mecklenburg-Western Pomerania . In September 1991 he became a member of the founding council of the Bündnis 90 party and from 1992 was a member of the federal council of spokesmen. In 1993 Lietz became the spokesman for the board of the state association Bündnis 90 / Die Grünen, which was now merged with the Greens . In the 1994 state elections , he ran as the top candidate, but the party failed because of the five percent hurdle. In 1997 Lietz resigned from the Bündnis 90 / Die Grünen party. In 1998 he founded the voter association Bürgerbündnis 2000 in the district of Güstrow.

From 1994 to 1999 he was also a member of the Synod of the Evangelical Lutheran Church in Mecklenburg . From 1995 to 1998 he was project manager for work with the homeless within the framework of regional employment promotion.

In October 2015, Lietz and 46 other GDR civil rights activists from different political camps signed the open letter to Chancellor Angela Merkel , initiated by Katrin Hattenhauer , in which it says at the beginning: “We support your policy of open borders. We support your refugee policy and your efforts for the sake of the people. With the greatest respect, we see your firm stance on accepting asylum-seekers in Germany [...] 70 years after the Holocaust, Germany opens its borders and saves people from need and death. "