Flag of the DFD

Founding event on March 7–9, 1947 in the Admiralspalast in Berlin

The Democratic Women's Association of Germany (DFD), founded in East Berlin on March 8, 1947, was a women's organization that was part of the National Front as a mass organization in the GDR . In West Berlin , the DFD district associations developed into the Democratic Women's Association Berlin (DFB). The DFD regional associations in the Federal Republic of Germany became an independent association on March 8, 1951, which was banned in 1957. Still elected to the People's Chamber in 1990, the DFD disintegrated with the end of the GDR.

The Democratic Women's Federation of Germany was founded at the German Women's Congress for Peace from March 7th to 9th, 1947 in the Admiralspalast in Berlin. The DFD emerged from the anti-fascist women's committees founded on October 30, 1945 . The still heterogeneous women's committees were merged into the DFD by order of the SMAD . 811 women from the Soviet occupation zone , 104 women from the western occupation zones as well as foreign guests and observers from the occupying powers were present. The congress was opened by Else Lüders . Elli Schmidt became the first chairwoman of the DFD in 1949. In 1950, regional associations were founded in the Federal Republic of Germany , which were banned as anti-constitutional organizations on April 10, 1957 as part of the KPD ban .

Development in the Soviet Zone / GDR

The DFD saw itself as the legacy of the women's movement . The first anti-fascist , democratic , politically and religiously independent organization quickly became a mass organization in the wake of the SED into line . The DFD was integrated into the Democratic Bloc of the National Front and provided proportional representation for the People's Chamber and, from 1952, also in the district and district assemblies, where it ostensibly campaigned for the implementation of the constitutional principle of equal rights for women. The DFD was largely insignificant and received the lowest budget of any mass organization. He participated in the "Mother and Child Protection and Women's Rights Act," which was passed on September 27, 1950.

In the fifties it was about an increased production work of women by housewife brigades , in the sixties training and further education were the central concern. In series of events and lectures, the DFD then increasingly dealt with health and pregnancy counseling.

After the 1st Women's Congress in 1964, he increasingly looked after women who were not organized, not employed or only employed part-time in order to win them over to their careers. At the instigation of the DFD, women's academies and special classes for women were established in educational institutions from the second half of the 1960s. In the 1970s, the DFD organized over 200 “advice centers for household and family” in district and district towns, which quickly developed into practice-oriented advice for marriage, household and baby care .

Approaches by the GDR lesbian movement in the 1980s were blocked by the DFD.

Housewives Brigade of the DFD, 1960

From autumn 1958, after an SED propaganda campaign under the responsibility of the DFD, housewives brigades were set up in almost all economic sectors. These were low-paid or part-time volunteer jobs. The campaign, which lasted until 1962/63, was intended to alleviate the labor shortage and encourage housewives to take up permanent employment.

The badge consisted of the letter group DFD, which is surrounded by a rectangular frame. The F protrudes above and below this frame. The whole thing is on a blue background. 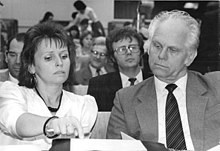 DFD MPs Karin Bencze and Günther Maleuda in the People's Chamber on June 28, 1990.

No more DFD - Dienstbar, Obgsam, Dumpf was written on banners of women during the demonstrations during the turnaround and peaceful revolution in 1989. After the Peaceful Revolution in 1989, the DFD participated in the first free Volkskammer elections on March 18, 1990 , but only achieved a share of the vote of 0.33%. In doing so, he won a mandate that was carried out by Karin Bencze . Together with the 9 members of the Democratic Peasant Party of Germany (DBD) she formed the DBD / DFD parliamentary group . In the course of the dissolution of the DBD at the end of August 1990, the parliamentary group disintegrated, Karin Bencze went as a guest to the FDP parliamentary group. The DFD disintegrated as a mass organization.

After the reunification of Germany , the non-profit association Democratic Women Association was founded on October 26, 1990 . V. (dfb) was founded as a successor organization, which in 2003 had around 5000 members. This maintains regional offices in the five eastern German states and in Berlin. In addition to its other goals (promoting the democratic community, organizing labor market measures, promoting tolerance and international understanding), the dfb is responsible for the organization and maintenance of women's shelters . The honorary chairwoman is the writer Gisela Steineckert .