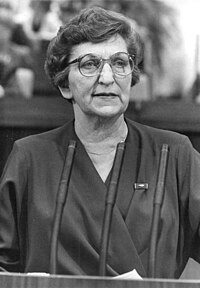 Ilse Thiele in the Palace of the Republic in East Berlin during the XII. DFD Congress 1987

Ilse Thiele (born November 4, 1920 in Berlin as Ilse Neukrantz ; † January 10, 2010 there ) was a German politician . From 1953 to 1989 she was chairwoman of the mass organization Democratic Women's Federation in Germany , a member of the Central Committee of the SED and a member of the People's Chamber of the GDR .

Ilse Thiele was born into a working class family in Berlin. Like her brother Heinz Neukrantz, she attended elementary and middle school in Berlin and worked as a stenographer from 1937 to 1945 during the Nazi era . In 1930 she joined the Berlin Workers' Sports Association (ASV) "Fichte". After the end of the war, she joined the Communist Party of Germany in 1945 and became a member of the SED in 1946 through the forced unification of the SPD and KPD . In 1946 she moved from Celle back to Berlin, worked as a stenographer in various companies and in the municipal women's committee in Berlin-Lichtenberg. She became a member of the FDGB in 1946 . In 1947 she attended the SED state party school. From 1948 to 1950 she worked as a district councilor for social affairs in Berlin-Lichtenberg. She was one of the founding members of the Democratic Women's Association of Germany in Berlin. In 1950 she was deputy state chairwoman and state secretary of the DFD in Berlin and attended the Karl Marx party college in 1950/51 . On April 20, 1952, she took over the chairmanship of the Berlin women's organization as the successor to Roberta Gropper . From January to September 1953 she was organizational secretary in the federal executive committee of the DFD and in September 1953 replaced Elli Schmidt as DFD chairwoman. She held this office until her resignation on November 16, 1989.

From February 1954 she was a member of the DFD parliamentary group of the People's Chamber and from April 1954 Thiele was also a member of the Central Committee of the SED. In May 1954 she became a member of the Presidium of the National Council of the National Front and in November 1971 a member of the State Council of the GDR . From 1964 to 1989 she was one of the vice-presidents of the International Women's Democratic Federation (IDFF). Still on 4 October 1989, she declared on the occasion of the 40th anniversary of the GDR's founding, the Women's Federation will help "even more successful in shaping the GDR in the fifth decade of its existence." After the peaceful revolution put them on January 11, 1990 her People's Chamber mandate and resigned as a member of the State Council.

Chairwoman of the Democratic Women's Association of Germany in the GDR