Voter in the voting booth 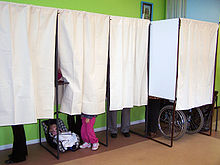 The voting booth or voting booth is a non-accessible to third parties space or shed , the secret election will allow. Therefore, they may only each one will enter person what in Austria Commission of the choice diocese , approved in Germany election committee has to watch.

If a voter is disabled, an accompanying person of his choice can help, for which the further details are regulated in the election regulations.