Ernst Günther Burggaller in 1925 on a standard 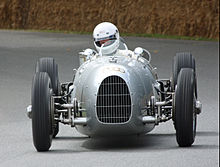 An Auto Union Type A as driven by Burggaller in 1934

The pastor's son Ernst Günther Burggaller, who comes from Tillendorf in the province of Posen , served during the First World War in the Air Force of the German Empire as a fighter pilot in Jagdgeschwader 1 , the legendary flying circus under Manfred von Richthofen, and piloted an Albatros D.III . After the First World War he opened a driving school in Berlin .

Like many of his colleagues, Burggaller started his racing career as a motorcycle racer and between 1922 and 1928 he achieved a total of 24 victories in Eichler & Bachmann , AJS , Mabeco , BSA , Standard , Imperia and BMW . Among them, for example, the 1926 spring race on the Berlin AVUS in the 750 cc class on a BMW.

In 1928 he switched to automobile sport and started on a Bugatti Type 37 A , with which he won a class at the 1929 German Grand Prix at the Nürburgring the following year . In 1930 Ernst Günther Burggaller exchanged his car for a Type 35 B and formed a racing team with Heinrich-Joachim von Morgen and Hermann zu Leiningen . In 1932 he got a new Type 51 A engine with two overhead camshafts , which was inserted into the Type 35 B chassis and which was then converted into a monoposto . Between 1932 and 1934, Ernst Günther Burggaller was successful at home and abroad and was one of the top German pilots in the 1500 cm³ class during this time . He won in 1932 and in 1933 the Grand Prix of Czechoslovakia in the Masaryk circuit ; in the Eifel race he was second in 1933 and third in 1934, in the Avus race in 1934 and in Lemberg (Ukraine) he finished second and in Bern third. Burggaller also drove a MG in the class up to 800 cm³.

Burggaller later started on a 750 cc Austin with a two-stroke engine . In 1934 he went as a substitute for the ailing Leiningen at the Grand Prix of Germany for the factory team of Auto Union at the start, came up with the difficult to control Grand Prix cars Type A but can not cope.

In the second half of the 1930s, Burggaller withdrew from racing and then devoted himself first to his driving school and later to his property .

In 1938 Ernst Günther Burggaller returned to aviation. During the Second World War he served with the rank of major in the Wehrmacht Air Force . From October 26, 1939 he was in command of Group II of Jagdgeschwader 51 . On February 2, 1940, Burggaller touched the ground with a Messerschmitt Bf 109 E during a low-level flight exercise on the Kippenhorn near Immenstaad on Lake Constance . The plane burst, Ernst Günther Burggaller was killed in this accident at the age of 43. His grave is in the Berlin Waldfriedhof Dahlem in section 22 B.

1Burggaller retired with his car on the fifth lap with transmission problems, then took over the vehicle from August Momberger and retired after 20 of 25 laps, also with a technical defect.