Bock beers from the Netherlands

Bock beers belong to the strong beers . They are top or bottom fermented beers whose original wort content is above 16 degrees Plato and the alcohol content is 6.5% by volume and above. It is available in light and dark, but also as a strong wheat beer. 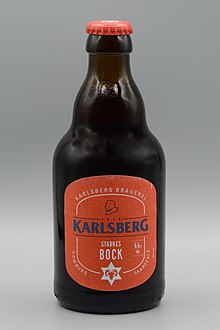 Bock beer in a Stubbi bottle from the Karlsberg brewery

The strong beer is brewed with a higher original wort content than a normal full or draft beer . The mash is thicker because less water is added. There are light and dark bock beers. In today's offer, a bock beer is usually a dark, sweet and less hopped stout beer. Bitter hops are preferred . The light representatives are accordingly traded as light goats , but also as May buck . There are also light and dark wheat buck .

Due to the special, often dark malts, Bock beer has a full flavor and brings with it the roasted aromas provided by the malt. Often the caramel sweetness and the high alcohol content are emphasized by the bitterness of the brewed hops. According to the severity of the beer and an often lower amount of carbon dioxide (compared to full beers), the foam is creamy and also colored beige, especially with a dark buck.

Although the two terms billy goat and buck beer apart from the wording have nothing to do with each other, a billy goat is depicted on the labels of some bock beers. On the Animator bottle from Hacker-Pschorr , for example, two rams (rams) can be seen facing each other.

The origin of this type of beer lies in the former Hanseatic city of Einbeck in Lower Saxony . With the granting of the city charter in 1240 by the sons of Henry the Lion , brewing rights were also associated with the citizens. The top-fermented beer brewed in the Middle Ages was considered a luxury product and was exported over long distances, including to Italy . In order to achieve the necessary shelf life, it was brewed with an unusually high original wort content . The result was a heavy, alcoholic beer.

The ducal court of the Wittelsbacher in Munich had been supplied from Einbeck since 1555, until the first Bavarian Hofbräuhaus was founded in 1573 at Landshut Castle Trausnitz and in 1589 it was relocated to Munich to brew beer itself. In 1614, the master brewer Elias Pichler von Einbeck was lured to the Hofbräuhaus, which from then on brewed his Ainpöckisch beer in Munich. In the Munich dialect this became the name Bock beer over time . The word strong beer is much younger, it did not appear until the 20th century.

Einbecker Winterbock in an original bottle from the Einbecker brewery

A Doppelbock is a bock beer that is brewed with an original wort content of over 18 degrees Plato. The alcohol content is between 5% and 12% by volume and is therefore in the upper ranges of the varieties on offer. Beers of this group often have the final syllable -ator in their name, based on the Doppelbock Salvator of the Paulaner brewery .

The distinction between buck and double buck used today goes back to older German legislation. It required value ranges for the original wort content to be adhered to, with Bock beers having an extract content of more than 16% and Doppelbock at least 18% original wort. Even if today the dependency of the recipe on local conditions (for example in the brewing water) has decreased and the range of varieties has increased, the names have established themselves and are still in use.

In the course of the Counter Reformation , the Bavarian Elector Maximilian I called Paulan monks into his country. They founded in 1627 in the Munich suburb of Au , the monastery Neudegg ob der Au . The order imposed strict fasting rules on its members, among other things, only liquid food was allowed to be consumed during the fasting period . The monks came from Italy, and fasting was difficult for them in the climatically harsher Bavaria . At first they made do with the Ainpöckschen beer from the Hofbräuhaus, which did not fall under the fasting rules. This strong beer was very high in calories, as it was fermented relatively poorly compared to today's beers, and thus had a filling and invigorating effect. The Paulans succeeded in obtaining a brewing privilege from Maximilian. From 1629, they made their own beer. In doing so, they raised the original wort again, so they got a stronger and more filling beer than the "ainpöcksche" (a buck) from the Hofbräuhaus. The later name Doppelbock goes back to this. In honor of the founder of the order, St. Francis von Paola , it was brewed every year until April 2nd, the day of his death, and was called Herrenbier , St. Francis Oil or St. Father's Beer . The latter name changed to the term Salvator .

The Paulans were allowed to brew, but they were not licensed to drink . Nevertheless, they soon began to serve their strong spring beer to the population in the garden and cellar of the monastery. This was tolerated by the authorities, although the Munich innkeepers and brewers protested against it.

Today's fame of the Munich strong beer goes back to the Paulan monk Valentin Stephan Still , called Frater Barnabas . He was born on February 15, 1750 in Fischbach near Nittenau as the son of master brewer Georg Still and learned the trade of master brewer himself. At the age of 23 he entered the Paulan monastery in Amberg as a lay brother . A few years later he became the master brewer for the Paulaner in der Au. He introduced the invitation to the Bavarian Elector Karl Theodor to the annual tap of the strong beer on April 2nd and to serve him the first mug of beer. In return, on February 26, 1780, Karl Theodor officially allowed the Paulans to serve beer in public. In the secularization in 1800 the Paulan monastery was expropriated and fell to the Elector Maximilian IV Joseph . Shortly afterwards, Franz Xaver Zacherl leased the Paulaner brewery, which then became the bourgeois Paulaner brewery . Zacherl continued the tradition of the annual strong beer tapping and gradually it developed into a social event at which celebrities, preferably politicians, drank , i.e. H. be targeted at cabaret. Today it is known as the strong beer tapping on the Nockherberg .

From around 1840, other Munich breweries began to sell Doppelbock beer under the name Salvator , and from 1884 the Fürth brewery Geismann too . Zacherl complained against it on the grounds that Salvator was not a brand name, but a brand name. The court agreed with Zacherl, and the breweries were forced to rename their Doppelbock. The suffix -ator was usually retained. Even today, many Doppelbock beers have a name ending in -ator , e.g. B. Animator , Bajuvator , Curator , Delicator , Maximator , Optimator , Palmator , Triumphator , Vitaminator . The Asterix Band Let's go to de Gotn! In the Bavarian dialect edition by Hans Well alludes to this: There the magic potion is called the magician .

Bottle with Torgauer Maibock
inscription: The goat here is the real beer

Traditionally, bock beers with a high extract content were brewed in late autumn for the winter time. Later, it was technologically possible to brew strong beers in spring as well. Examples of this are the Maibock and the Festbock .

Festbock is brewed in Austria for the pre-Christmas and Christmas season in light and dark versions. Bock beers are also brought onto the market for Easter. Sometimes special types of malt and hops are used for this. Sometimes the maturation and storage time is longer than usual. Austrian Festbocke are produced in the Zwettl private brewery , the Schleppe brewery and other Austrian breweries. In Germany, for example, Festbock is brewed in the Apolda brewery and the Bruch brewery in Saarbrücken.

Eisbock (wheat) with 12% alcohol by volume

Eisbock is made by icing the beer and removing the frozen water . This means that a significantly higher alcohol content can be achieved. Even if today the production takes place under modern conditions with different equipment, this beer specialty is produced for the connoisseur by some breweries according to this process. This method still corresponds to the beer definition, since only the water content is lower and all other ingredients remain unchanged.

Gray squirrel with The End of History in a BrewDog bar

With the freezing of Eisbock, the "battle" for the strongest beer in the world is waged. Such was Schorschbock 43 Brewery Schorschbräu from the Franconian city Oberasbach with an alcohol content of 43% vol., To the Scottish brewery a short time the strongest beer in the world BrewDog this with The End of History still significantly exceeded. Then in 2012 the Franks were again ahead with the Schorsch Eisbock with 57%. In October 2012, the Scottish brewery Brewmeister launched the Brewmeister Armageddon with an alcohol content of 65%. This was even exceeded with the "Snake Venom" from the same brewery with 67.5%.

It is said that around 1890 a journeyman brewer left barrels with bock beer in the open air in Kulmbach, Upper Franconia . During the following winter night some of the water in the beer froze; the alcohol and the remaining components of the beer collected in concentrated form inside this block of ice. The next day, the master ordered his journeyman to open the blocks as a punishment and to drink the liquid inside. To the surprise of both of them, this was definitely edible: they had invented the ice-goat by chance. Even today, the process is based on this simple principle, in which water is removed from the strong beer by freezing.