Theodor Haubach (born September 15, 1896 in Frankfurt am Main , † January 23, 1945 in Berlin-Plötzensee ) was a German journalist , politician ( SPD ) and resistance fighter against National Socialism . 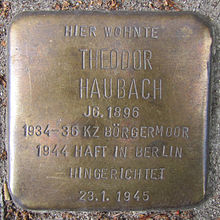 Haubach was born as the son of the coffee wholesaler Emil August Justus Haubach (1854–1896) and Emilie Hirschfelder (d. 1939), who came from a Jewish family. Theodor Haubach spent his childhood and youth in Darmstadt , where he completed his secondary school diploma in 1914 with Carlo Mierendorff and Wilhelm Köhler (entrepreneurs) at the Ludwig-Georgs-Gymnasium . Haubach, who belonged to the Wandervogel movement , then volunteered and was a participant in the First World War until 1918 . He served as a soldier on the Western Front and took part in battles near Ypres , the Argonne , Champagne and Verdun . During the war, Haubach was wounded eight times or became seriously ill. Haubach processed part of his war experiences in lyric and prose texts, which were published between 1915 and 1918 in Die Dachstube , a Darmstadt journal of literary expressionism . Haubach also published fictional texts and political considerations after the war, in which he rose to the rank of lieutenant in the reserve , which were published in various newspapers and magazines. He was also involved in Darmstadt's cultural policy and took part in the establishment of the Darmstadt Secession . To Haubachs immediate post-war activities, the employees in part workers and soldiers of Butzbach .

From 1919 to 1923 he studied philology , philosophy , social sciences and economics in Heidelberg , Munich , Frankfurt am Main and again in Heidelberg . Among his most important teachers were Alfred Weber and Karl Jaspers , with whom he completed his studies with a doctorate .

Since 1920 Haubach, like his friend Carlo Mierendorff, was a member of the SPD and actively worked with the Young Socialists . From 1924 to 1929 Haubach worked as an editor for the daily newspaper Hamburger Echo , then from November 1929 to March 1930 as a press officer in the Reich Ministry of the Interior and from May 1930 to July 1932 as press chief for the Berlin police chief. Since 1924 Haubach was a leading member of the Reichsbanner Schwarz-Rot-Gold , an association that campaigned for Weimar democracy and actively fought against the Nazi regime, which was pressing towards power.

On October 3, 1924 he founded the Club of October 3 with Gustav Dahrendorf , Egon Bandmann and Alfred Vagts (all SPD) as well as Hans Robinsohn , Ernst Strassmann and Heinrich Landahl (all DDP ) , the aim of which was to fight the enemies of the Weimar Republic , which on the other hand was also supposed to provide mutual support for political initiatives.

From 1927 Haubach belonged to the Hamburg parliament for the SPD ; he resigned in November 1929 in order to concentrate fully on his new post in Berlin.

In 1930 Haubach was a member of the advisory board of the Abraham Lincoln Foundation , a German branch of the Rockefeller Foundation .

From February 1933, Haubach, like many SPD members, was persecuted by the Nazi regime . In 1933/34, together with Karl Heinrich, he built an underground social democratic organization consisting essentially of Reichsbanner members and numbering more than 1000 members. After his first arrest in 1934, he was imprisoned in the Esterwegen concentration camp . After his release from prison in 1936 he got a job in the paper factory of a friend from university Viktor Bausch (entrepreneur) and later got in touch with the Kreisau district . In September 1939 he was temporarily arrested as part of the special war campaign . After the unsuccessful assassination attempt on July 20, 1944 , Haubach was arrested again and sentenced to death by the People's Court . Seriously ill, Theodor Haubach was hanged on January 23, 1945 together with Helmuth James Graf von Moltke in Plötzensee .

Before his arrest, Theodor Haubach got to know the singer Anneliese Schellhase , who was closely linked to him in an intimate love affair until his end. She tried in vain, even through a personal conversation with Roland Freisler , to save him from execution.