The combustion railcar 877 (later DB class VT 04.0 ) was the first diesel express railcar of the Deutsche Reichsbahn (DR) and at the same time the first streamlined train in scheduled service. From 1933 onwards, it was used to establish the world's fastest train connection between Berlin and Hamburg , with a top speed of 160 km / h. He was known as the Flying Hamburger .

The two close-coupled wagon existing multiple unit with the former company number 877a / b was established in February 1932 by the DR in the wagon and Maschinenbau AG Görlitz ( WUMAG ordered). It was delivered at the end of 1932 and accepted in February 1933.

A test drive on December 19, 1932 between Lehrter Bahnhof and Hamburg Hauptbahnhof was set by the express railcar with a speed record. The train covered the 286 km distance in 142 minutes .

The Flying Hamburger on a German postage stamp 2006

New to the Flying Hamburger were the streamlined shape (although this remained the only multiple unit with a deep-drawn front roof), which was developed in wind tunnel tests , the lightweight construction and the diesel-electric drive . Each of the two cars had a Maybach twelve-cylinder four-stroke diesel engine GO 5 with a DC generator connected to it and electric traction motors . The diesel engines with the flanged generators were built into the end bogies (machine bogie), the traction motors were built into the Jakobs bogie for reasons of mass distribution. With an output of 2 × 420 PS ( 2 × 302 kW ), a top speed of 175 km / h was achieved in test drives; the maximum speed was set at 160 km / h for scheduled use. The Maybach GO 5 engines initially caused a number of problems, partly due to the rigid engine suspension in the machine bogie , partly due to the insufficiently dimensioned crankcase. These problems were largely eliminated with the further development of the Maybach GO6 . Franz Kruckenberg already took this into account when designing his DR 137 155 high-speed railcar (not to be confused with the rail zeppelin he also designed ) and stored the engines in shoe-mounted frame suspensions instead of the machine bogies previously used. The Maybach engine in its final stage of development is still used today as the GTO 6 in various locomotives of the DB class V 60 .

The train was a einlösigen, fast-acting Knorr - compressed air brake Ksbr and a magnetic brake equipped, with whom he h from a speed of 160 km / could be brought within 800 meters to stop. The railcar was only supposed to run as a single vehicle, which is why it only received disguised, light emergency buffers and also disguised tow hooks.

The multiple unit had 98 seats in two open- plan car compartments and a four-seat buffet. As a sign of its exclusivity, it was painted cream and purple like the cars on the “Rheingold Train” .

At first, the cream-colored window band was also drawn around the front sides, later pictures show that the area around the front window was also painted in purple up to a quarter-circle color separating edge. This was done on the one hand to adapt the appearance to the other express railcars of the type Hamburg, Leipzig and Cologne, on the other hand the cream-colored front side suffered very quickly from soiling from the traffic.

The DR 877 was a prototype for other express railcars:

The success of these express railcars meant that in 1935 in Kassel, Henschel & Sohn and the Wegmann & Co. wagon factory developed the streamlined but steam locomotive-hauled " Henschel-Wegmann Train " with comparable services and used in long-distance express traffic between Berlin and Dresden .

From May 15, 1933, the multiple unit ran as scheduled between Berlin Lehrter Bahnhof and Hamburg Hauptbahnhof. He needed 138 minutes for the 286 km long route, a time that was only undercut 64 years later in June 1997 by an ICE train of Deutsche Bahn AG with 132 minutes. Currently (2015) the fastest trains cover the route in 98 minutes. The railcar was parked during the Second World War . From 1945 it was used as a passenger train by the French occupying forces and returned to the Deutsche Bundesbahn in 1949 , which modernized it in 1951, painted it purple and classified it as VT04 000 a / b. The modernization also included the installation of a multiple control and Scharfenberg couplings with contact attachments at both ends so that it can be used coupled with other VT 04. The railcar was stationed in Hamburg in 1955/1956 and was occasionally used as a reinforcement railcar for the Copenhagen Express between Hamburg and Großenbrode Kai . It was shut down in 1957. 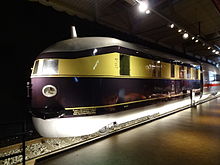 Fragment of the Flying Hamburger in the Nuremberg Transport Museum

After his secondment was the vehicle the Railway Museum passed there, the railcar was disconnected. The front railcar half a was cut again in the middle due to lack of space, the torso with driver's cab is now on display in the Nuremberg Transport Museum. Section b was scrapped in AW Nürnberg in 1961 due to a lack of interested parties, as was the remaining half of section a.

For the first time, the car demonstrated the pioneering design of the express railcars, which was implemented after it from vehicles of the Hamburg , Leipzig , Cologne and Berlin types before the Second World War .

The car bodies were made largely of a welded construction in lightweight construction. They are supported by a shared Jakobs bogie and two end bogies. What was noticeable about the vehicle compared to the other express railcars of the Deutsche Reichsbahn were the lowered roof front and the small front windows, which were created as a result of wind tunnel investigations . These investigations also resulted in the side aprons and the waiver of regular pulling and bumpers . For the first time, the car bodies were constructed in the form of the frame design, which subsequently dominated railcar construction, with vertical columns made of rolled profiles , a continuous top belt made of sheet steel and roof bows. The passenger areas with the seating arrangement 1 + 3 were designed as open- plan compartments with a central aisle. The seating comfort on the three-seater benches was soon felt to be inadequate and was changed to the 1 + 2 arrangement for the following SVT. In addition to the engine room, car a contained the luggage compartment with a floor area of ​​7.4 m², a narrow anteroom, the large passenger area with 42 seats as well as the two toilets including washing facilities and another anteroom, which also had a heating niche. Car b began from the short coupling end with a short anteroom with a refreshment room including four seats, the open-plan compartment with 56 seats. This was followed by another anteroom and the engine room. Both engine rooms were also the driver's cabs of the vehicle.

The bogies were also a welded construction made of profiles and sheets of the Görlitz type. The car bodies were supported by a cradle on the bogie frame. On the middle Jakobs bogie, the suspension was designed twice due to the higher load. The mechanical brakes were external drum brakes with a diameter of 780 mm. The brake drums were screwed to the wheel disks on the inside of the end bogies and on the outside of the Jakobs bogie. The brake blocks were covered with an asbestos coating, they were applied by individual brake cylinders with a diameter of 70 mm with a stroke of 60 mm.

The machine system for this vehicle was designed with the two Maybach GO 5 diesel engines and the flange-mounted generator sets in the end bogies, as well as the traction motors in a pivot bearing arrangement in the Jakobs bogie. The diesel engines were each stored in a subframe, which was suspended at three points in the machine bogie. The diesel generator unit was covered with a sheet metal hood. Since this swiveled out in a curve with the bogie frame, it was still covered by a foldable wooden frame attached to the floor frame. With the available diesel fuel of two times 990 liters, the railcar reached an operating range of 1000 km. Filling nozzles for refueling were fitted under the lobes on both sides. The speed of the diesel engines was regulated in seven steps depending on the set speed, from speed step 0 with 800 min −1 to 1400 min −1 in speed step 6. In addition, there was a position * for particularly high tractive forces, which was only used for starting could be used up to a speed of 25 km / h, at higher speeds you had to switch back to a lower speed level.

The cooling water of the two diesel engines was recooled underfloor in each machine bogie in a finned cooler with eight elements. These finned coolers were force-ventilated by two fans. A cooling water circulation pump driven by the diesel engine via gears ensured that the cooling water circulated in the engine. This could be preheated in the expansion tank using electric heating rods. Both cars in the railcar were heated by a coke-fired hot water heater. The exhaust gases were led upwards and gave the characteristic image of the railcar with the exhaust hood located at the end of the short coupling. The double car was equipped with a two-stage air compressor of the Knorr type to supply the compressed air system . This was electrically driven directly from the main generator. The compressor could not start if the voltage was below 380 V. There were two options for generating compressed air in spite of longer idling trips or when maneuvering. A so-called pump switch could be used to increase the excitation of the generator, which increased the voltage to 600 V, or the battery-powered auxiliary air compressor could be used. The railcar had an on-board network of 48 V, which was fed by an underfloor alternator or the battery. When the diesel engines came to a standstill, the power supply was automatically switched to battery operation.