The title of this article is ambiguous. Further meanings are listed under Dieppe (disambiguation) .

Dieppe [ djɛp ] is a French town in the department of Seine-Maritime in the region Normandy . It is a sub-prefecture of the arrondissement of the same name and the capital ( chef-lieu ) of two cantons .

The sea and fishing port on the Alabaster Coast with 29,080 inhabitants (as of January 1, 2017) is located at the point where the Arques River flows into the English Channel . Opposite him, on the English side of the Canal, is Newhaven , East Sussex .

Dieppe was settled by the Normans around the year 900 about 150 years before the conquest of England by William the Conqueror . The English word deep for "deep" and "Dieppe" have the same Germanic origin. It refers to the natural harbor entrance of the place, which has always been ideal for sea trade.

The place was completely destroyed twice: the first time in 1195 by the Capetian Philip II August , the second time in 1694 by a Dutch - English fleet under Admiral Berkeley, who wanted to destroy the positions of the French corsairs operating in the English Channel . Dieppe owes its baroque appearance to the rebuilding after the bombardment of 1694, which caused a wildfire .

From the 16th century Dieppe was a starting point for the French voyages of discovery . Jehan Ango , the discoverer of Brazil and Sumatra , was born in Dieppe in 1480 or 1481 and died there in 1551.

In 1848 the railway line from Paris to Dieppe was opened. At the time of Napoleon III. Dieppe became the first glamorous seaside resort in France based on the example of the English seaside resort of Brighton . Both the train from Paris and the ferries from Newhaven brought bathers to Dieppe. The magical light in the area attracted many artists. The impressionists Camille Pissarro and Eugène Delacroix were the first painters who discovered Dieppe for themselves. They were followed by Eva Gonzalès , Ernst Oppler and others. The romantic composer Camille Saint-Saëns was also drawn to the town, as was the naturalistic writer Guy de Maupassant . When Léon Blum's Popular Front introduced holiday pay in 1936 , tourism in Dieppe took off again.

During the Second World War , Operation Jubilee took place on August 19, 1942 : Allied troops , especially from Canada , tried to land around 6,000 men on the beach at Dieppe. Dieppe was occupied by German troops at this time. 907 Canadians and several hundred soldiers from other nations (British, American and German) fell; 119 Allied aircraft were lost (106 of them, the highest daily loss in the history of the RAF ), about 2,000 men were taken prisoner by Germany . Of the 4,963 Canadians, 2,210 returned after the mission, many wounded. On September 1, 1944, the II. Canadian Corps reached Dieppe. Canadian scouts (they drove from Rouen to Dieppe by motorcycle) had reported that the Wehrmacht had evacuated Dieppe the day before.

See also : Tourism in France  and History of the Railway in France # Consequences of the Law of 1842 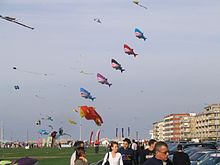 The kite festival that takes place on Dieppe beach in late summer is considered the largest organized kite festival in the world. Every two years hundreds of hang-gliders from all over the world are invited to the Channel Coast to display the typical kites of their country in a tent on a 150-meter-long promenade. There are large delegations as well as individuals such as Peter Lynn from New Zealand or Robert Brasington from Tasmania .

In the years when the kite festival does not take place in Dieppe in France, it is carried out in the twin town of Dieppe (New Brunswick) in Canada .

The train station, inside, panorama 2019

Dieppe is an important sea and fishing port and has a marina with 500 berths . Mainly exotic fruits like bananas and pineapples are delivered. There are up to four car ferry connections to Great Britain every day . The crossing takes a good four hours; in summer there is also a small SeaCat fast ferry ; with this the journey only takes about two hours.

The city is about a two-hour drive from Paris and is a popular destination for the Parisians, especially on weekends.

The airfield Dieppe-Saint-Aubin has only a minor role.

The sports car company Alpine is based in Dieppe.

Since the local elections in 2008 (term of office until 2015), Dieppe has been ruled by a left-wing coalition PCF / PS . Mayor is the communist Sébastien Jumel.

The FC Dieppe is the most famous football club in the city.

Hotel Royal on the Boulevard Verdun

Municipalities in the Arrondissement of Dieppe (A – L)

Municipalities in the Arrondissement of Dieppe (M – W)