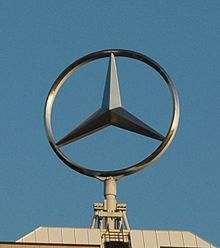 The Mercedes star has been the trademark of all Mercedes-Benz vehicles since the merger of Daimler-Motoren-Gesellschaft (DMG) with Benz & Cie. in 1926. 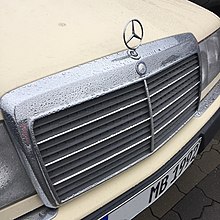 The Daimler-Motoren-Gesellschaft had a three-pointed star as its logo, which, however, was much more massive than today's Mercedes star. This initially had no edge, but was later supplemented by one that was initially deposited behind the tips. On this edge there were four smaller stars and the word Mercedes.

With the merger of Daimler and Benz to form Daimler-Benz AG on June 28, 1926, a new logo was devised, which can still be found on most of the brand's vehicles today in the form of a blue and silver badge. With this the star was now inside the circle and only touched it with the tips. On the edge there were now remains of Benz's laurel wreath and the words Mercedes Benz .

The Mercedes star in its present form was as a refinement of the logo as a hood ornament introduced.

While the characteristic star used to be on the hood of the majority of Mercedes models, today this is only the case for sedans and station wagons in the C-Class (partially), E-Class (partially) and S-Class . On the other models, the star is integrated in the radiator grille. The Mercedes star for the vehicles is produced in Wülfrath, North Rhine-Westphalia, at the Witte Niederberg company .

In 1957, to improve the safety of passers-by, Mercedes Benz introduced the star that can be bent with a spring and folded back automatically.

The Mercedes star can be viewed from both sides and is one of the most famous trademarks in the world.

The hinged hood ornament was often broken off. In addition to vandalism , the reason was that Mercedes is a symbol of the establishment . Sometimes the Mercedes star was worn in the punk subculture, which implied that the wearer must have broken it off a car.

For several decades, Mercedes-Benz used the slogan “Mercedes-Benz - your good star on all roads” to advertise its automobiles. In 1995 the then Daimler-Benz AG registered the word mark “MERCEDES-BENZ - IHR GUTER STERN”.

In Bad Aussee , the three banks of a river confluence are connected by the Mercedes bridge with a ring-shaped walkway.

For advertising purposes, large-format Mercedes stars, some of which rotate, have been installed on skyscrapers and towers in major cities in Europe. Examples are: the main train station and the former DaimlerChrysler corporate headquarters in Stuttgart , the tower of the Mercedes-Benz branch in Munich , the Stern high-rise in Kassel , the Europa-Center and AVUS motel in Berlin, the Mercedes-Benz plant in Bremen , the Bonn-Center (up to 2017), skyscraper on the Berlin Promenade and Mercedes-Benz factory building in Saarbrücken , Europahaus in Bochum , Gildehof Center in Essen (until March 2019) and temporarily the " Haus am Ufer " in Moscow .

In some cases, these advertising symbols gave cause for criticism: The Mayor of Essen Rosemarie Heiming (CDU) felt the star on the Essen Gildehof Center was a disguise, the city of Munich sued the star on the tower of the DaimlerChrysler branch and the star on the "Haus am Ufer “in Moscow was dismantled ex officio.

In 1991 the Bundestag faction of the PDS (at the time "PDS / Linke List (LL)") protested against a move from their former domicile in Bonn's Heinrich-Brüning-Strasse to the Bonn Center (with a Mercedes star on the roof) . Ulla Jelpke , MP of the PDS, told the President of the Bundestag Rita Süssmuth that "the advertising on the house would seriously affect the high level of respect for the work of the German Bundestag". It is "incompatible with the dignity of the Bundestag that MPs have to prepare for their responsible work behind advertising spaces from Mercedes-Benz, VW, Philips, etc."

Since the Dreizackweck manufactured in Worms-Horchheim bears a certain resemblance to the Mercedes star, a trademark dispute broke out in 1953. Daimler-Benz called for the trident purpose to be discontinued. In court, however, the Dreizackweck, or the community, won, since the Dreizackweck was a traditional pastry that was demonstrably baked as early as 1754.

Meaning of the star

The three-pointed Mercedes star symbolizes the motorization on land, on water and in the air (each point an element). Gottlieb Daimler wanted to build engines for cars, ships and planes.