The title of this article is ambiguous. For the German historian see Karl Wülfrath . 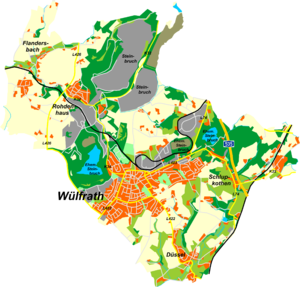 Wülfrath is a medium- sized town in the Mettmann district ( North Rhine-Westphalia ) and the smallest medium- sized center in the Niederbergisches Land .

Wülfrath, view of the old town

The city is located in the Niederbergisches Land between the Rhine , Ruhr and Wupper rivers . The old town center lies in a small valley through which the river Angerbach flows. The newer districts spread out on the slopes of the valley.

The Wülfrath urban area borders on the independent city of Wuppertal and on the cities of Velbert , Heiligenhaus , Mettmann and Ratingen (all of the district of Mettmann). 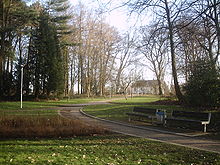 Wülfrath was one of the first clearing settlements in the great early medieval imperial forest. The borders were delimited in a deed of donation from Emperor Heinrich IV. Dated October 16, 1165 with the rivers Rhine , Ruhr and Düssel (Tussella). The eastern border was the old high path of the Kölnische Strasse (strata colonensis) . It ran from the Werdener Ruhrbrücke via Velbert and Wülfrath along the Düssel towards Cologne . The center of the medieval village was a manor (Mollmershof), which was sold to the Count von Berg in connection with the Hardenberg rule . With the possession of the court, which included an extensive Hofverband with many individual farms, particularly in the Honnschaften Erbach and Püttbach, the right was linked to determine the pastor.

The village of Wülfrath was first mentioned in writing towards the end of the 11th century as Wolverothe (= clearing of the settler named Wolf) in a parchment of the Kaiserswerth monastery . The origins go back much further. Based on the legend of the settler Wolf , who was expelled by his clan and who is said to have cleared the then abundant forest on the site of today's town center in order to settle there, the town's history can be traced back to about 713. At that time, the first church building (a small, early medieval hall church with a rectangular choir) could have stood on the site of today's church square. A Romanesque church has stood there since the 11th century , and was expanded to include Gothic elements in the 15th century . In the middle of the 15th century it is called St. Cornelius Church. The tower and north aisle with a partition wall to the central nave are Romanesque and probably from the 12th century. The central nave is Gothic from the 14th century. According to the keystone, the southern nave in late Gothic style was completed in 1524. The church is surrounded by a ring of houses and shops and is the center of a uniquely beautiful Altberg church square.

875 were Honnschaften and modern neighborhoods Flandersbach (Flatmarasbeki = the brook, settled on the Flattmar) and Rützkausen (Hrotsteninghuson = at the houses of the clan of Hrotsen) in the description of the tenth district of an der Ruhr Monastery are called, as in 1533, the Hofgut To Fudickar (HStA Düsseldorf, inventory of Werden Abbey, IX a, no. 6) with weir storage facility and outer courtyards. In 1256 the Catholic St. Maximin Church in Düssel (Dussela) was mentioned, but the oldest parts of the Romanesque pillar basilica can be dated to the early 12th century. Around the year 1100 the place name Wülfrath ( Wolverothe , which later developed into Wulfrod, then Wulfrath to today's Wülfrath) was mentioned for the first time in a parchment written by monks from the Kaiserswerth monastery.

A blacksmith can be attested to as early as 1265 on the basis of the tax and interest registers . The Püttbach estate in the Wülfrath Honnschaft of the same name is owned by the Teutonic Knight Order in 1392 . It was the Oberhof for the free float of the Order , in which the annual Hofgericht was held.

In 1578 a major fire broke out in the village, which reduced the settlement to ashes and caused the roof and the church spire to go up in flames. In order to help the seriously injured residents, the sovereign, Duke Wilhelm V of Jülich-Kleve-Berg , known as Wilhelm the Rich , issued a market letter in 1579 which gave his "Dorff und Kirspel Wulfrod" four free annual markets. But no sooner was this fire forgotten than exactly one hundred years later the village was devastated again by a major fire. The entire town center with over 70 houses was turned into a field of rubble.

After the Wars of Liberation , the place - as part of the newly formed Rhine Province - became part of Prussia in 1815. By ordinance, Wülfrath was appointed to represent the cities in the Rhineland Provincial Parliament in 1827 . In 1856 it finally received full city rights through the awarding of the city ​​regulations for the Rhine Province .

In 2001 part of the historic old town was again destroyed by flames. On the night of January 21, a fire broke out in the heart of the old town, killing three old half-timbered houses. The completely destroyed houses had to be demolished and have now been replaced by modern new buildings.

At the end of September 2013, the Anger-Markt, which is to represent a new commercial center of the city, was opened on the former town hall and town hall area.

The municipal reorganization, which came into force on January 1, 1975, brought the city a great loss of territory and population; the population fell by around 3,000. Parts of the Upper Flandersbach were reclassified to Velbert, parts of the Düsseler Höhe and Hahnenfurth and the Dornap district to Wuppertal. An area of ​​around 3 km² with 166 inhabitants at that time was taken over by Mettmann.

Population development of Wülfrath from 1980 to 2015 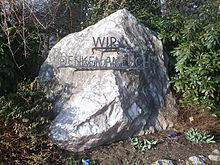 A memorial to the war victims

Large memorial to the war victims

Other churches and religious communities:

Claudia Panke has been the elected mayor of Wülfrath (independent) since 2009 . In the mayoral election in 2009, Panke was elected the new mayor of Wülfrath with 26.96% of the vote. She was able to prevail over incumbent Barbara Lorenz-Allendorff , who received 24.42%. Due to a new NRW municipal electoral law, no runoff election was necessary for the first time.

In the mayoral election in 2014, Claudia Panke was re-elected as mayor with 69.49% of the votes in the first ballot. Claudia Panke's term of office ends in September 2020.

The debts of the city of Wülfrath as of December 31, 2012 were 85,945,047 euros. This corresponds to a per capita debt of 4,079 euros per inhabitant. As one of the first municipalities in Germany, the city of Wülfrath has voluntarily introduced a so-called sustainability statute for the area of ​​city finances, with the help of which the city aims to reduce its debts and thus reduce the repayment and interest burdens.

The Wülfrath city ​​coat of arms , which developed after 1840 from an old church seal of the Evangelical Reformed parish, was redesigned by the Düsseldorf heraldist and painter Wolfgang Pagenstecher in 1938 and officially recognized by the Upper President of the Rhine Province. It shows a shepherd who sticks his stick (stick) into the throat of a wolf attacking him . This representation is intended on the one hand to symbolize the victory of good over evil and on the other hand to refer to the development of the town center. It hardly reminds of the settler Wolf, who is believed to be the founder of the city.

Furthermore, the city of Wülfrath had taken on the following sponsorship :

Wülfrath has a historic church square and an old town with a pedestrian zone. The residential area of Düsseler Tor has a kindergarten in the design language of Friedensreich Hundertwasser . Other sights are the Schlupkothen quarry with its educational and adventure trail (EUROGA 2002 plus) and the cycle and art trail (EUROGA 2002 plus). Outside the city is the Kaiser Wilhelm Memorial .

By the middle of the 19th century, more than 100 commercial and industrial enterprises had settled. These were larger house businesses - mostly home weaving mills. After 1850, the first larger companies with steam power were founded. Despite the strong industrialization at the time, the agricultural character was not completely lost. Today there are only a few farms left.

The founding of the Rheinisch-Westfälische Kalkwerke Dornap in 1887 and the Rheinische Kalksteinwerke Wülfrath in 1903 (today jointly part of the Belgian Lhoist Group as Rheinkalk) were formative for Wülfrath . As the largest limestone quarry in Europe, the Rheinkalk works in Flandersbach is still the focus of Wülfrath's industry.

There were also numerous weaving mills, leather processing companies, an outsourced branch of the Ford factory in Cologne, which emerged from the body factory Josef Hebmueller Söhne founded in 1889 and still exists today (tedrive Steering Systems GmbH) and many small businesses.

The largest employer in Wülfrath is the Bergische Diakonie Aprath , which operates, among other things, several old people's homes as well as children's homes and socio-therapeutic facilities. PUKY , based in Wülfrath, is a medium-sized manufacturer of children's vehicles.

In the district of Aprath, Wülfrath has a connection to the S 9 S-Bahn line on the Wuppertal-Vohwinkel-Essen-Überruhr line . The Wülfrath-Aprath stop is today the only remaining train station in Wülfrath and can be reached by bus from Wülfrath city center once an hour. However, there is also an hourly express bus from Wülfrath city center to Wuppertal. The Wülfrath station was in the center of Wülfrath on the Angertal and Niederbergbahn , but their traffic has been suspended for a long time. 51.28412294 7.03399028

Wülfrath is connected to the German motorway network via the A 535 (AS Wülfrath).

The only hospital in town, the Ev. Herminghaus-Stift hospital was closed at the end of 2006 after being taken over by the St. Antonius Clinics . Care is now provided by the hospitals in the neighboring cities of Mettmann , Velbert and Wuppertal .

Cities in the Mettmann district