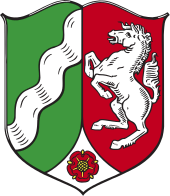 In 1947, Wolfgang Pagenstecher designed the state coat of arms for North Rhine-Westphalia after redesigning the coat of arms of the Rhine province in 1926 .

Wolfgang Pagenstecher (born March 16, 1880 in Elberfeld , † December 26, 1953 in Düsseldorf ) was a German landscape , animal and portrait painter of the Düsseldorf School and heraldry .

He came from the Westphalian family of lawyers and scholars, Pagenstecher . In 1898 he began studying art at the Düsseldorf Art Academy with Professors Ernst and Fritz Roeber , Peter Janssen the Elder. Ä. and Wilhelm Spatz . The further training path led him to Florence in 1909 , where he spent a year in the Villa Marmagliano with Emil Frisch and Hans Deiker on a scholarship . He later visited Dresden, Paris and Munich. From 1914 he took part in the First World War as a lieutenant in the reserve and company commander of the Fusilier Regiment "Queen" (Schleswig-Holsteinisches) No. 86 . He was badly injured. He spent a captivity in Bordeaux . After the World War he began to design custom coats of arms.

Pagenstecher created numerous coats of arms for cities and municipalities, including the coat of arms of the Rhine Province, changed in 1926, and the coat of arms of North Rhine-Westphalia . His collection, which includes around 13,000 drawings of coats of arms and seals , is now in the North Rhine-Westphalia State Archives in Duisburg . Another part of his estate is in the Neuss city archive (signature D.04.P.03).