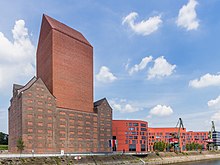 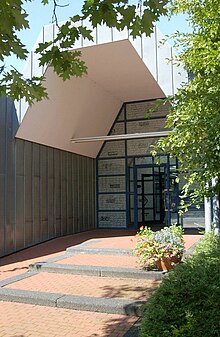 The North Rhine-Westphalia state archive is divided into the following departments:

The North Rhine-Westphalia state archive is thus divided into four different locations (as of May 2014).

The Rhineland Department of the State Archives, formerly located in Düsseldorf and Brühl, moved to a new building in Duisburg's inner harbor in 2014 . For this purpose, according to the planning of the architects Ortner & Ortner Baukunst, a historical storage building of the Rheinisch-Westfälische Speditions-Gesellschaft was converted from 2010 to 2013, an archive tower was built and an undulating office wing was added. The reopening at the new location took place on May 9, 2014.

According to press reports, the actual construction costs for the new building of the Rhineland department in Duisburg are at 195 million euros compared to the calculated costs of 30 million euros, 550% higher than estimated. In several press reports, allegations of corruption were raised here. A parliamentary investigation committee was set up in North Rhine-Westphalia to clarify the situation. In addition to the state archive, it investigates the expansion of the Cologne-Kalk police headquarters , the construction project for the Cologne University of Applied Sciences and Kellenberg Castle . Since the construction and property company of North Rhine-Westphalia (BLB) played a role in this, the term BLB affair was also used in the media .

The following parts of this section seem since 2014 is out of date to be : What was the outcome of the Committee held? - Flominator 13:20, 12 December 2015 (CET)
Please help with to the missing information research and insert .

The employees of the North Rhine-Westphalia State Archives

The tradition of the North Rhine-Westphalia State Archives goes back in individual pieces to the 7th century and extends into the present day. The range of documents is correspondingly large: In addition to documents, files, official books and cards, the magazines are increasingly being filled with photos, films, audio documents and electronic data carriers. In total, the holdings of the State Archives currently cover around 160 kilometers of shelves (100 kilometers of which are at the new location of the State Archives in Duisburg).

In principle, everyone can use the archives of the North Rhine-Westphalia State Archives in accordance with the regulations of the North Rhine-Westphalian Archives Act. However, there are legally regulated blocking periods, in particular to protect the rights of individuals. Most of these deadlines can be shortened on request for scientific purposes.

Users can research the holdings overviews, the catalogs of the service libraries and increasingly also the finding aids on the Internet on the website of the State Archives or in the “Archive in NRW” Internet portal. The archives and holdings of the service library can be viewed in the reading rooms of the individual locations. Microforms and digital copies are available for many documents , which enable careful use. The website of the State Archive of North Rhine-Westphalia provides detailed information on usage.