The municipality of Westerhever is in the northwest of the peninsula Eiderstedt located and extends over the diked marsh areas of the same name titled Kooges plus the fact east adjoining so-called Westerhever Osterkooges . The position of these two crags forms a promontory protruding to the west between the Wadden Sea stream of the Hever in the north and the Tümlauer Bucht in the south.

The municipality of Westerhever is on three sides by protected National Park area of Schleswig-Holstein Wadden Sea surrounded. Neighboring communities in the southern and eastern areas are as follows:

The Hochsand Westerheversand extends northwest of the municipality at the southern end of the North Frisian Wadden Sea . Salt marshes have formed near the outer dike, on the edge of which the Westerheversand lighthouse was built as one of the striking landmarks of the place, as well as of the entire Eiderstedt peninsula.

The salt marshes between the sandbank and the sea dyke are now 246 hectares in size and have expanded in recent years. The first measurement of an area of ​​three hectares was made in 1887. After a dike-parallel creek was dammed in the same year, the meadows grew to 90 hectares by 1901. In 1903 a drivable dam was added, as well as groups for drainage, and in 1930 also Lahnungen for land reclamation.

If the land was originally intensively grazed, the situation was changed by the Schleswig-Holstein Wadden Sea National Park . Since 1991 three quarters of the area have been excluded from use. Since then, the number of vegetation types has increased from 7 to 16. Especially since participated samphire and beach Soden to -Fluren, which now account for almost a quarter of the area. Also took salt Subscribe to -Fluren that were 1988 not to find, but in 2001 were 7% of the vegetation, beach Quecken emerged as new and form 3%. The Andel lawn , which is insensitive to grazing, fell sharply: in 1988 it still formed 71% of the vegetation, in 2001 it was only 11%, and the red fescue lawn , which is also insensitive , fell from 8% to 4%. Bottenbinsen calcareous grasslands in turn went from 1988 to 1996 returned to expand again in 2001 and took this year, a 10% of the area.

The salt marshes with the lighthouse and the upstream high sand Westerheversand with its bathing beach attract around 80,000 visitors every year.

Westerhever used to be an island. It was settled in the 12th century. The first people built large villages like Sieversbüll, Leikenhusen or Stufhusen and protected the island's economic land with a ring dike.

The first church in 1123 was destroyed in the great Mandränke (storm surge) of 1362.

Today's brick church St. Stephanus , consisting of the nave from 1804, which was much smaller than in the past, and the Gothic tower built in 1370, together with the Kirchspielkrug restaurant, forms the sole center of the village.

Close to the center of the village is the Wogemannsburg , a terp where the so-called Wogemänner lived between 1362 and 1370 . These operated piracy, but also plundered the surrounding villages. The Wogemänner was defeated in 1370 by the stable Owe Hering and the residents of the area. The castle was destroyed and the stones used to strengthen the church and to build the church tower.

Many Haubarge still exist in Westerhever . Jacob Alberts , the so-called Halligen painter , was born in 1860 on one of these Haubarge, the Siekhof . He found his final resting place in the Westerhever cemetery. 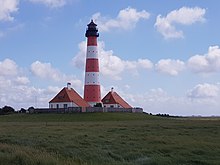 In the Poppenbüll district there is a mast on which the marks of the highest water levels so far are attached.
Brands (from top to bottom):

Municipalities in the district of North Friesland