The municipal area extends north of Husum in the former glacial valley of the Arlau . The river initially crosses the municipality in a westerly direction and roughly marks the northern municipal boundary in the eastern and central section. The river then turns south in front of the former outer dike in the Neuer Hattstedter Koog (until 1987). After passing the Arlauschleuse, it flows through the Beltringharder Koog , partly guided by dam structures . The large Arlau reservoir is located here in front of the Holmer Siel in the state protection dike . Its northern dam roughly forms the southern boundary of the municipality,

The area of ​​the Beltringharder Koog was divided among the neighboring communities after the dike was dyed. The middle section was assigned to the municipality of Hattstedtermarsch. As a whole, it is being developed from a nature conservation perspective . A large salt water lagoon dominates the middle section. During normal operation, this basin is fed by incoming and outgoing North Sea water. The ring flow within the lagoon is created by the natural turbulence of the water masses flowing in and out on both sides through a chamber each in Holmer- and Lüttmoorsiel . These passages are only sealed off during storm surge weather conditions.

The municipal area reveals a rural, open settlement character. Individual settlements dominate , which were often built on terps in the Altes Koog . The district of Altendeich (today: street name) forms an elongated group settlement . It extends alongside the barely recognizable historical dike line of the Hattstedter Alten Kooges .

The dominant traffic axis is the federal highway 5 . This crosses the municipality in a north-south direction almost in a straight line and connects the towns of Struckum and Hattstedt, which are directly adjacent to the Geestrands. The other traffic channels are largely rural and partially winding farm roads , which are accompanied by deep drainage ditches.

The history of the Hattstedtermarsch goes back to the dikes of two kegs. The Hattstedter Alter Koog , which today bears the name of the municipality , was wrested from the sea in the second half of the 15th century. Shortly afterwards, in 1500, the Hattstedter Neuen Kooges was dyed (also known as the Nordkoog due to its location to the older settlement area).

However, the first economic activities in the then largely unsealed marsh bay in front of the eponymous Geestrandsiedlung Hattstedt took place earlier. Today it is assumed that fishing was already practicing agriculture in this area before the 5th century.

In the times of belonging to the Duchy of Schleswig , this area was part of the former administrative district of Südergoesharde .

One of the most difficult tasks to solve from the start was draining this very low-lying land. It could only be solved collectively. Thus, at the end of the 18th century, the individual settlements in this area merged to form the Hattstedtermarsch-Commüne , an association that was responsible for this area of ​​responsibility. This community, later referred to as the village , formed the origin of the independent rural community founded on April 1, 1934 in the district of Hattstedt. After the administrative districts were dissolved in 1948, the municipality became part of the parish state municipality of Hattstedt , which was renamed to Amt Hattstedt in the same year . Like the office, the community belonged to the Husum district , and from 1970 to the North Friesland district .

In particular, the severe storm surges from 1962 and 1976 caused great headaches for the region's coast guards. In particular, the outer dike line in the area of ​​the Hattstedter Neuer Kooges , which is prone to many curves, was very prone to dike breaches. For this reason, plans were drawn up to dike the entire Nordstrander Bay, which led to the construction of Beltringharder Kooges , which is partly part of the municipality . With this, the danger of flooding large marshland areas in central North Friesland was averted for the first time. At the same time, the new Koog now represents an excellent development opportunity for the municipality in the area of ​​tourism.

Solvei Domeyer has been mayor since June 2018.

Agriculture used to be the main source of income. However, it has undergone a major structural change in the last few decades, which has reduced its importance as a whole. To this end, other economic sectors have increasingly established themselves in recent years. Small businesses have mainly emerged in the tourism and handicraft sectors, and to a lesser extent in the wind energy sector . 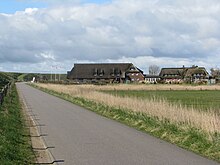 The well-known Hotel Arlau-Schleuse is located directly on the Beltringharder Koog and the Arlau. There are also many private holiday apartments and houses.

When the Beltringharder Kooges was dyed in 1987, the Hattstedtermarsch lost its bathing spots and thus an attraction. The next bathing spots are now not far from the community in Schobüll or on Lüttmoorsiel.

Active vacationers still have sport and leisure opportunities. The wide and partly winding road network is suitable for cycling, motorcycling or inline skating. The waters of the Arlau or the Jelstrom offer fishing opportunities. The Arlau is also suitable for small canoe tours. Nature lovers get their money's worth on excursions in the Beltringharder Koog .

The most important traffic arteries of the west coast of Schleswig-Holstein run through the Hattstedtermarsch area with the B 5 and the Marschbahn . The current course of the federal road marks the border to the so-called Easter March , a part of the Hattstedter Alter Koog . The federal traffic route planning provides for the re-routing of the B 5 in the future. It will then for the most part directly adjoin the railway line to the east. With the relocation, the aim is to relieve the neighboring villages of Hattstedt and Struckum , as well as Breklum and Bredstedt further north from through traffic. The other traffic routes in the municipality are comparatively narrow, but nonetheless of solid construction.

Municipalities in the district of North Friesland