An evolutionary adaptation (or scientific adaptation ) is a characteristic that occurs in a population of a particular living being , which is advantageous for its survival or reproductive success, and which has arisen through natural mutation and subsequent selection for its current state. In this context, a characteristic can concern both appearance and shape ( morphological peculiarity) as well as a behavior . In order for a trait to be adaptive , i.e. to flow into the gene pool of a population as an adaptation and to be able to spread in it, it must be hereditary. H. have a genetic basis. Sexual reproduction has a higher rate of adaptation than asexual reproduction.

Characteristics that are advantageous for the organism, but which first had a different function after their emergence, are called exaptations . The alternative term used for pre- adaptation is nowadays avoided because it gives the wrong impression of a development aimed in advance towards a new “purpose”. An exaptation would be e.g. B. the feathers in the wings of birds, which originally only had the function of thermal insulation in their presumed ancestors, flightless reptiles, d. H. already existed at the beginning of the evolution of birds (see Archäopteryx ) and, after a redesign, could also fulfill a new function. Evolutionarily neutral or harmful traits are sometimes referred to as "adaptation" or "disaptation"; however, these terms are not in common use.

In principle, evolution is not goal-oriented, but is based on random changes in the genome , which lead to genetic variations and thus to a greater variety of phenotypes that have to prove themselves in a given environment ( ecosystem ). However, since a directed selection is often effective after the random mutations , it makes sense to speak of adaptations.

The sum of the adaptations of the organisms of a species defines its ecological niche . Through acclimatization , living beings can adapt to certain environmental factors within the limits set by their genetic make-up. The different possible phenotypes of a genotype are referred to as its response norm. Adaptations are always made to the current environment (if you take it very precisely: to the environment of the respective parent generation). The consequence of this is that a feature can possibly lose its adapted character because the environment changes. Originally adaptive features, which now become disadvantageous in a changed environment, are also referred to as maladaptation (also: maladaptation). If an organism lives in an unpredictable, changeable environment, high genetic variability or a wide response norm can itself be an adaptive characteristic.

The environment of an organism is not only the abiotic conditions and factors , but also the other living beings with which it lives together - including its conspecifics ( biotic factors ). Organisms accordingly also develop adaptations in response to these living beings, e.g. B. Fast running ability to escape predators . Since the other organism can also adapt, this can lead to feedback. One speaks here of co-adaptation . Co-adaptations can lead to symbiosis or mutualism if they are beneficial for both partners. In other cases they often lead to an evolutionary "arms race" (see also coevolution ).

As a rule, an organism in its natural environment does not have to adapt to just one single factor, but to many at the same time. These requirements can present a conflict situation. The actual adaptations therefore usually do not correspond to the technical optimum for a particular function, but are based on compromises. Within the habitat of a population, several ecological optima can exist which do not overlap and to which increased adaptation would be advantageous. However, adaptations to one function lead to disadvantages for the other. Since the respective population is genetically related, compromises in the adaptation can even lead to the fact that the actual population misses both optima. If individual individuals are particularly well adapted to a combination of factors, this advantage can be lost again in the following generation through pairing with differently adapted individuals (the factor is referred to as gene flow in population genetics ). In such cases, or if there are no genotypes adapted to several optima at the same time, a “disruptive” selection can set in with the population . This leads to the division of a population into two or more sub-populations and thus enables the formation of new species in the long term (see also Adaptive Radiation ).

Graphic representation in the fitness landscape

Sketch of a fitness landscape. The arrows indicate the preferred path of a population in the landscape through selection. Points A, B and C are local optima. The red ball represents a population that is moving from a very low fitness value towards a local peak.

Evolutionary adaptation can be graphically represented in the fitness landscapes introduced by Sewall Wright . This is a form of graphical representation of the fitness (reproductive success) of different gene combinations, which can represent both a certain phenotypic characteristic (e.g. eye, gills, exoskeleton, brood care behavior ) as well as the entire phenotype. Valleys in these landscapes mean less reproductive success of the gene combinations, hills represent more favorable gene combinations. Natural selection shifts the trait or phenotype to the top of the hill as an evolutionary adaptation. There the feature is adapted to its environment. Random movements in other directions in the fitness landscape are known as genetic drift . An adaptation, starting from a local summit on the way downhill and then uphill again to another, higher summit, is usually not evolutionarily possible. For example, a whale can no longer develop gills that it once had in a phylogenetically earlier phase.

Since the end of the 1970s, under the catchphrase adaptationist program, there has been a debate about the extent to which organisms are actually adapted in their populations. In an influential paper, Stephen Jay Gould and Richard Lewontin defended themselves against what they saw as excessive individual consideration (“atomization”) of features that are individually subject to selection and adapted. In fact, numerous characteristics are not selected by-products of other, adapted characteristics. This means that properties of an organism could survive even without a direct function reference and thus without selective advantages. Ernst Mayr took a stand on this attack on evolutionary adaptation. Mayr emphasized that adaptation does not lead to a perfectly optimized process, since "stochastic processes and other constraints", including pleiotropy , prevent perfect adaptation. The exaptations fit into this context. Already Darwin had pointed out that there is no perfect match. The dispute over the degree and extent of evolutionary adaptation is open today.

Examples of causal factors of adaptation

Extremophilic microorganisms that have developed heat-resistant proteins can e.g. B. colonize volcanic lakes and thus expand their habitat into particularly warm or very hot biotopes such as hydrothermal springs and geysers . These thermophilic organisms have their ecological niche in temperature ranges in which other living things die. It may just as well be that the thermophiles arose first, because the cyanobacteria and archaea belong to the very old microorganisms in evolutionary history . The conditions on the early Earth ( Precambrian ) were such that the adaptation was more likely to have occurred in the opposite direction - from hot waters to warm to cold ones.

Another adaptation mechanism in higher animals is the avoidance of heat radiation through night activity . This adaptation phenomenon is found mainly in desert areas .

If the outside temperature drops sharply, animals of the same temperature have to generate more energy in order to maintain their body temperature and thus ensure the functionality of the vital proteins. Mammals and birds that have developed particularly thick fur or plumage can live in cold climates . In many mammals in the temperate zone, but especially in polar latitudes, a change of coat takes place. The thicker winter fur protects them from heat loss, the thinner summer fur often has a different color. For some mammals such as the ermine , the change of coat also serves as camouflage . Most marine mammals and penguins that live in ice-cold sea water have a layer of fat under their skin to provide heat insulation. In the case of whales and seals , this layer is called the bubbler . Fur seals also serve to isolate air pockets, this also applies to sea ​​otters , which have no insulating layer of fat, but very fine, dense fur. Some animals react to the cold by shutting down their metabolism and falling into hibernation , others build a den .

Protective mechanisms for adapting to cold seasons also exist in plants. Deciduous trees lose their foliage in autumn and survive the winter with a greatly reduced metabolic activity due to temperature. The sunlight could also be used for photosynthesis during the shorter day lengths on days with temperatures above freezing point , but the night frosts would freeze the leaves and die anyway. Therefore, deciduous trees have periodic leaf fall . Conifers, on the other hand, keep their leaves or needles, which contain essential oils and other biological antifreeze factors .

Detail from a butterfly wing, here the eyes of larger animals are simulated 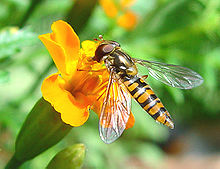 A Schwebefliege pretends a dangerous wasp to be

Above all, strong wind harbors the risk of being blown away from the habitat .

Above all, strong currents harbor the risk of being washed away from the habitat.

Darkness renders one of the most important senses, the visual sense , worthless. Cloudy water has a similar effect.