Fig. 1: Schematic representation of a bacterium with chromosomal DNA (1) and plasmids (2).

Fig. 2: Schematic representation of a plasmid with antibiotic resistance genes (1 & 2) and origin of replication (3). 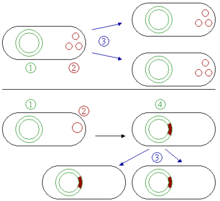 Plasmids are small, usually circular, autonomously replicating , double-stranded DNA molecules that can be found in bacteria and archaea , but are not part of the bacterial chromosome (nuclear equivalent), i.e. are extrachromosomal (Fig. 1). Plasmids also rarely occur in eukaryotes (e.g. as a 2-micrometer ring in baker's yeast ). Their size is usually between 2  kBp and 200 kBp, in exceptional cases between less than 1 kBp (mini plasmid) and over 1000 kBp (megaplasmid), the transition between megaplasmid and mini chromosome being fluid.

Plasmids can contain many different genes . Do these genes convey z. As an antibiotic - resistance , may result from the host bacterium is a selective advantage. Each plasmid contains at least one sequence that as a replication origin (Engl. Origin of replication , shortly ORI) is used. If the origin of replication is compatible with the bacterial strain, the plasmid can be replicated independently of the chromosomal DNA (Fig. 2). Plasmids are thus autonomously replicating ( replicons ) and are inherited. Depending on the type of replication origin, there are few ( low-copy , due to iterons , antisense RNA or ctRNA ) or very many copies ( high-copy ) in a bacterial cell .

Episomes are in bacteria plasmids of the chromosomal DNA into the host organism integrate can, like the F-plasmid (Fig. 3). They can remain there for a long time, are replicated with every cell division of the host and can even become an integral part of its DNA. However, like other plasmids, they can also exist on their own.

Occasional viral episomes in eukaryotes, such as the cccDNA of the hepatitis B virus or the episomes of the herpes viruses and adenoviruses , do not integrate into the host's genome , but are also present in the cell nucleus . The episomes of smallpox viruses , which occur in the cytosol , are an exception . Viral episomes are mechanisms for immune evasion in infections with persistent pathogens .

Different types of plasmids can coexist in one and the same cell, in Escherichia coli e.g. B. up to seven. If two plasmids are incompatible with each other, one of them will be destroyed. Depending on the ability to coexist in the same cell, they can be divided into incompatibility groups.

The classification of plasmids can be done by their function. There are five main classes:

A special type of plasmids are the so-called Ti plasmids (tumor inducing), which transfer a transfer DNA . They are often part of certain bacteria ( Agrobacterium tumefaciens or Agrobacterium rhizogenes ) and are transferred to plants by them. There they cause the only known cancer in plants.

Another special plasmid is pR1SE from Halobacterium lacusprofundi R1S1 , found in Antarctica in 2017 . This is able to form vesicles (protective bubbles). It is debated whether pR1SE could represent a transitional or intermediate form to viruses.

Plasmids are important tools in molecular biology , genetics , biochemistry, and other biological and medical fields. They are referred to as vectors in genetic engineering and are used to duplicate or express genes . The specific adaptation of a vector is known as vector design .

Many of the plasmids used for this purpose are commercially available, but they are also shared between laboratories and are often available from non-commercial suppliers such as Addgene . They are derived from the naturally occurring plasmids and still possess their structural components such as the origin of replication ( origin of replication , ORI). In addition, they have been modified so that they can easily be used for cloning (they contain a so-called MCS ( Multiple Cloning Site ), which contains recognition sequences for a large number of restriction enzymes): The gene to be replicated is inserted into plasmids, which have a Gene with antibiotic resistance . These plasmids are then introduced into bacteria that grow on a nutrient medium treated with the appropriate antibiotic . So only those bacteria will survive that have taken up the plasmid with the information for antibiotic resistance . Bacteria that have not ingested the plasmid die from the antibiotic. The antibiotic acts as a selection marker that only allows bacteria with the resistance plasmid to survive. Usually, when the gene is inserted into the plasmid, another gene ( reporter gene ) is interrupted, which can then no longer be expressed . This missing property can be used for screening , because only those bacteria that have taken up a plasmid with the desired gene no longer have this property. If genes are introduced into plasmids which ensure that the genes introduced are expressed in large quantities ( expression plasmids ), the corresponding gene products can be obtained in large quantities. Today, this procedure allows the production of recombinant insulin ( i.e. insulin identical to human insulin), which previously had to be isolated from pigs in a laborious process.

If a DNA segment is to be introduced into an organism ( bacterium , plant , animal , human, etc.), plasmids can also be used as carriers. In animals and humans, this method is only really established for cells in cell culture, since the cells there are easily accessible as a monolayer . Depending on the cell type, either precipitated DNA (muscle cells through endocytosis ) or DNA packed in liposomes is required for the transfer . There are other methods such as electroporation , which can further increase the transfection efficiency.

Plasmids in various conformations in an electron microscope image.

Plasmids can be made visible in an electron microscope using suitable methods, such as coloring with uranium atoms ( BAC spreading ). The ring structure of the plasmid in the form of a DNA wound around itself has topological consequences. The plasmids can be in three different forms. The supercoil shape is the natural conformation of the plasmid. Since the DNA double helix is ​​wound around itself and cannot unwind in a closed plasmid, a torsional tension arises, which causes the plasmid to bend around itself in space. The same effect can be observed with telephone cords that twist around their own axis. In the open-chain form, one of the two DNA strands is broken at one point (a so-called nick), which means that the open strand can rotate freely around the fixed strand; this relaxes the torsional tension and the plasmid is open. In linear DNA, both strands are broken, the circular structure is canceled.

Difference to the chromosome

Differentiating between plasmids and chromosomes is not that easy. One definition implies that plasmids are smaller than chromosomes. However, z. B. the plasmid pSymB of Sinorhizobium meliloti twice as large as the primary genome of Mycoplasma pneumoniae . Another definition is that plasmids do not carry essential genes . However, the question of what an “essential gene” is depends on the living environment. Another definition is that plasmids exist in the cell in more copies than chromosomes. However, plasmids such as the F plasmid in E. coli and many others are present in the same number of copies as the chromosome. A crucial characteristic of a chromosome is that its replication is coordinated with the cell cycle. This means that the start of replication always takes place at the same age of the bacterial cell with uniform growth. According to this definition, the second chromosome of V. cholerae would actually be a chromosome. The term chromide has been proposed for replicons at the border between chromosomes and plasmids .