The title of this article is ambiguous. Further meanings are listed under Foliot (disambiguation) . 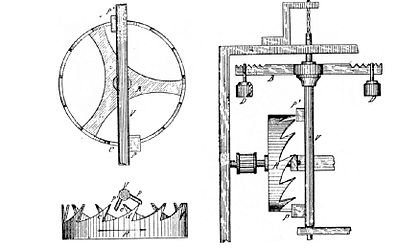 Beam with adjustable weights and spindle (with 2 lobes), crown wheel

The foliot ( trembling leaf ; German: Waag , Balkenwaag or spoon balance ) is part of the oldest mechanism, which has been used in a wheel clock since around 1300 , with which an approximately uniform rate is achieved (see gear regulator ).

A variant of the beam was a wheel called Unrest . (Not to be confused with the balance , which, together with a spiral spring, is a mechanical oscillator and came into use later when the pendulum came into use.)

In addition to the horizontally arranged beam (the beam balance or the foliot in the narrower sense), the mechanism also includes the shaft (the spindle ) around which the beam rotates and the two lobes attached to it, which grip between the teeth of the crown wheel . The crown wheel (escape wheel) is the fastest turning wheel of the watch. Its speed of rotation determines its course. Without escapement by the Foliot mechanism, the clock would run too fast and unevenly. The bar's moment of inertia can be changed by means of radially displaceable weights, thus regulating the rate of the watch.

The mechanical watch was only made possible with the invention of the escapement with Foliot. Their other components, weight drive, gears and rotating hands, were already known.

The Foliot, which is pushed back and forth by the drive over the crown wheel and over the tabs on the spindle , is not a system with natural oscillation capability and cannot work isochronously . A watch with a Foliot was accurate to 15 minutes a day at best. However, the construction with Foliot paved the way for the use of a mechanical oscillator whose period of oscillation is a constant value when it oscillates freely and which alone determines the clock rate. The Foliot was replaced by the mechanical pendulum ( pendulum clock ) in the middle of the 17th century .