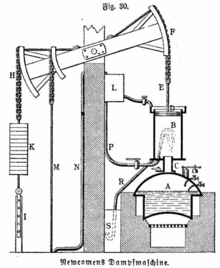 Newcomen was a blacksmith and ironmonger and had several large mining companies as customers. The advance of these mines to ever greater depths made it necessary to construct efficient machines for pumping out the penetrating groundwater .

In ten years of work, Newcomen invented the atmospheric steam engine for dewatering in mines, which was clearly superior to Thomas Savery's steam engine . But since Savery had an extensive patent on his invention, Newcomen could not patent his machine. That's why he partnered with Savery.

His machine used water injection to cool the water vapor in the cylinder and thereby condense it. This created a negative pressure in the cylinder space , so that the air pressure acting on the piston from outside or the normal pressure of the outside air pushed it back into the cylinder. The machines that were customary up to then simply waited for the condensation to take place until the volume in the cylinder chamber cooled down again by itself via the material of the piston and the cylinder as a heat conductor - due to the colder outside air - Newcomen's invention thus enabled significantly higher piston cycles.

The first Newcomen machine was installed in a coal mine in Staffordshire in 1712 . Without a crankshaft and flywheel, it worked via a balance on the pumps to be driven. The connection between the piston and the balancer was made using a chain. The efficiency of the machine was only 0.5 percent. Even so, it wasn't until the late 18th century that Newcomen's steam engines were replaced by James Watt's steam engines .

At the beginning the valves for letting the steam into the cylinder and for injecting the cooling water were operated by hand by a boy. One of these boys, Humphrey Potter, who was also employed on such a machine for opening and closing the taps, came (1712 or 1713) - probably for convenience - to make his work easier (and because he wanted to play with the other boys) came up with the idea of ​​having the valves operated by the machine itself. He connected the rising and falling balancer (beam) with the taps in a suitable way with cords and thus invented the automatic control without being aware of it himself.