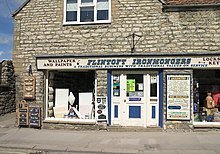 Interior view of a hardware store in Soignies ( Belgium ) 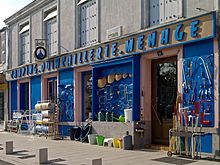 A hardware store in France , selling hardware and other household goods

Front of a penny token by Joseph Moir, advertising “Wholesale and retail hardware,” 1850

The hardware trade is the trade in hardware and related products and tools. Hardware are articles of daily use which are mostly made of iron and which are sold as commercial goods both in retail and wholesale . These are, for example: tools , cutlery, fittings , chains , screws , various agricultural implements such as hoes or scythes . Hardware are a subgroup of hardware .

In the USA and Great Britain, the term ironmonger is widely used as a supplier of consumer goods, whereas in the USA it is now mainly understood to mean small and medium-sized hardware stores.

Many pieces of hardware that have been and are offered by the hardware store are designed for public, commercial and private use alike.

The hardware trade was already partially combined with the distribution of other trade products, such as B. housewares, bicycles, key and / or lock trade or services, coal trade, porcelain goods, etc. or an iron or iron processing craft , z. B. blacksmith or locksmith and accordingly finds the modern addition on a larger scale in hardware stores .

The iron goods trade has a long tradition. The trade in iron itself took place in the earliest times since it was possible to process the material around 1200 BC. The investigation of the trade in metals and metal objects or hardware gave and gives valuable insights into the earlier societies and trade relations.

Up until the Middle Ages, the local blacksmith remained an important source of supply for weapons, tools and implements made of iron, as well as the modest everyday objects for private use. With the industrial revolution and the introduction of mass production , iron goods became more readily available and the price level fell significantly, and specialized iron goods stores with their own product catalogs emerged (see also: Sauerland traveling traders ).

The aim was to combine the functionality of the hardware with an appealing design (see also the art nouveau and Bauhaus style in some forms).

Over the years, some modern companies shifted the economic focus from the original iron trade and in some cases became world-famous companies with a wide variety of products, such as B. the hardware trade founded by Carl Benteler in Bielefeld in 1876 (see: Benteler (company) ), the company Debrunner Koenig Holding , Fa. AW Niemeyer , Fa. Oederlin or supplemented the portfolio with the hardware trade such as B. at the company Franz Haniel & Cie. of the later so-called industrial pioneer Franz Haniel . In Spain founded Manuel Agustín Heredia the first industrial Ironmongery (the 19th century).

The newly sworn Lord Mayor of London takes part in the Lord Mayor's Show Parade ( Eng. " Lord Mayor's Parade ") . In this parade, the twelve largest company Livery Companies in part, including the guild of ironmonger ( Engl. " Worshipful Company of Ironmongers '), the velvet and silk merchant, the grocer, the cloth merchant, the fishmonger, the goldsmith, the tailor, the fur merchant, the clothing merchant, the salt merchant, the wine merchant and the fabric processor.