Map of the US states: states and territories colored blue have a Democratic incumbent , red a Republican, and burgundy a member of the Vermont Progressive Party . The office does not exist in black-colored countries

A Deputy Governor ( English lieutenant governor ) have in the United States of 50 45 states , as well as four outdoor spaces . The vice-governor of a given state is the governor's deputy . If the latter leaves office prematurely, the lieutenant governor becomes the new governor. If the governor is temporarily absent, the vice-governor can temporarily perform his duties. In many states, the vice governor also presides over the respective state senate as its president by virtue of his office . 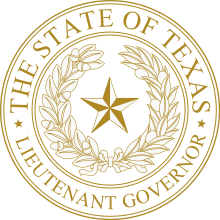 Seal of the Texas Lieutenant Governor

Seal of the Lieutenant Governor of Ohio

In numerous federal states, the respective vice-governor also presides over the state senate as President of the Senate , i.e. one of the two chambers of the state legislature . The lieutenant governor has no formal voting rights. However, if there is a tie, the lieutenant governor is entitled to decide with his vote. This competence gives it an important political role in the legislative process at the state level. As President of the Senate, the Vice-Governor also has the right to chair the meetings, but he does not always exercise this right. Each state senate always elects a president pro tempore (temporary senate president) who represents the vice-governor during his absence and who usually heads the day-to-day business of the respective senate. The power of representation of the President pro tempore , however, only includes the chairmanship of the Chamber of Parliament and not the office of the Vice-Governor himself. In many countries, however, the President pro tempore ranks third or fourth in the succession plan for the governorship (but he does not advance to Vice-Governor if a vacancy arises in this office, or takes on other duties of the Vice-Governor). The task of the Senate chairmanship of a Vice Governor is based on the role of the American Vice President , who also chairs the US Senate and also only has a vote in the event of a stalemate.

Last but not least, vice governors are entrusted with representative tasks. This includes the representation of the state government at important events or, more rarely, visits to other states.

Since in many states the composition of the state government is either incumbent on the governor or high officials are elected, the political significance of the lieutenant governor often depends on whether and to what extent the governor includes him in the business of government. The position also depends on the state; in Texas, for example, the lieutenant governor exercises more influence by chairing the budget committee than in most other states. In some states the office (as well as that of the US Vice President) is considered insignificant because the Vice Governor, unlike a Minister, is not assigned a special portfolio. There was a public joke in California that the lieutenant governor's job was to get up in the morning, read the paper, see if the governor had died and, if not, go back to sleep.

The term of office of all lieutenant governors except Vermont is four years (Vermont only two years). In some states, two-year terms of office existed for their governor and lieutenant governor in the past, but many parliaments have repealed these regulations through a constitutional amendment. The elections always take place by direct election (regardless of whether the lieutenant governor and governor are elected together), not through an electoral system, as is the case with the US president . All gubernatorial elections, as in the rest of the USA, always take place in November, usually parallel to the congressional elections and the elections to the respective state parliaments (which usually consist of two chambers, except in Nebraska) on the Tuesday after the first Monday of the month . With a few exceptions, the handover takes place in the following January, more rarely in December. However, the lieutenant governor's inauguration date is always the same as that of the governor.

Some states also have tenure limits for vice governors. In addition, the lieutenant governor must often have reached the age of 25, 30 or 31 in order to be eligible for election. In addition, there is also US citizenship. However, this is not necessary from birth. However, a minimum lifetime in the relevant state is often required.

Loss of a lieutenant governor 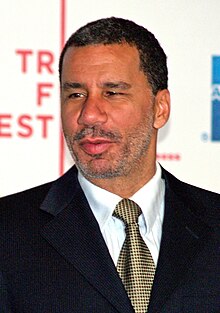 If the lieutenant governor resigns before the end of his term of office through death, resignation or removal from office, or if he is promoted to governor, in most states the office remains vacant until the next election. In the succession list, the third-highest office, either a minister, the president pro tempore of the state senate or the chairman of the lower chamber (usually House of Representatives or State Assembly ) in the event that the governor should resign or become incapacitated, would become the incumbent governor next become. However, in the time before such a possible failure of the governor, these persons do not advance to lieutenant governor or take over his executive duties, but remain in their office. However, it is controversial in some states (regulated in others) whether the governor has the authority to appoint a lieutenant governor when that position is vacant. There was a broad discussion in this regard for the first time in the state of New York in 2009 , when Governor David Paterson , who had succeeded his resigned predecessor Eliot Spitzer from the office of lieutenant governor a year earlier , without a specific basis, Richard Ravitch became lieutenant governor of New York appointed. The appointment has been controversial in both the state parliament and the US media. The Attorney General of the State (and later governor) Andrew Cuomo expressed concerns about Paterson's decision and questioned the constitutionality of the appointment of. The State Senate was split into two equal camps for several weeks until it finally approved Governor Paterson with a 32:30 vote. He argued that the governor had the right to appoint senior officials under the laws of New York State. Paterson's decision was later declared legitimate by the New York State Constitutional Court. Ravitch was previously sworn in as lieutenant governor and served until the end of the term on December 31, 2010.