The title of this article is ambiguous. For the embossing device of the same name, see shock mechanism .

A balancer in the Bochum mining museum 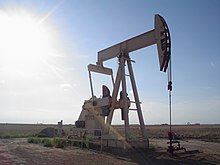 Balancing steam engine from 1848
postage stamp of the GDR 1985

A balancer describes a component of a steam engine, a water column machine, a pump for oil production or a part of the action of an organ.

The balancer is part of the early steam engine as it was improved and further developed by James Watt . The machines of that time had upright cylinders and were connected to the balancer via Watt's parallelogram , which here assumed the role of the machine's central lever . Corresponding to this task, it was initially made from a strong tree trunk that held the pivot points for the parallelogram, the balancing column and the connecting rod . In steam engines built later, the balancer was reinforced with steel or made of cast iron , unless it was completely dispensed with , as in a horizontal steam engine . In the USA, steam engines with balancing ("walking beam") were widespread in ship engines for side wheel steamers in inland and coastal shipping.

In crude oil production , the crude oil is pumped from depths of up to 2500 m by means of rod pumps. These pumps are also called horse head pumps because of their appearance . The balancer is mounted on the pump bracket. On the horse's head it is connected to the pump piston via a rod, and on the opposite side via a connecting rod to the crank of the drive machine.

In organ construction, a (pneumatic) balancer describes a component of the action which, in larger organs, helps to overcome the pressure point of the key by means of a small bellows below the playing valve . The invention goes back to Hans Henny Jahnn . In contrast to the Barker lever , the mechanical action is not interrupted.

Ship engine of a paddle steamer with "walking beam"