Head of a female android (project by Hanson Robotics)

Androide , also Android , (from ancient Greek ἀνήρ aner "human being, man" and εἶδος eidos "appearance", "shape" → "similar to a human (or man)") is the name for a machine being or a robot that is a human looks deceptively similar and behaves in a human-like manner. An android is therefore a special humanoid robot . A humanoid robot in the form of a woman is sometimes also called gynoid (e) (Greek: γυνή gyne "woman").

The term android was used by Eberhard David Hauber as early as 1740 . According to Hauber, Gabriel Naudé used the term for a speaking statue by Albertus Magnus . In the 19th century , automatons like Jacques de Vaucanson's flute player or the chess Turk were called androids. Even Pierre Jaquet-Droz was constructed from 1770 to 1774 three androids that Jaquet-Droz automata . At this time, research was also carried out on speaking machines, for example by Friedrich von Knauss , Valentin Merbitz and Wolfgang von Kempelen . However, the construction of a speech automaton did not succeed. When the chess Turk was exposed as a forgery, interest in human-like machines also waned.

In the literature, human-like robots were discussed in the early 19th century by Jean Paul ( Der Maschinenmann ) and E. T. A. Hoffmann ( Der Sandmann , Die Automate ). From Julius Stettenheim 1895 (was Muckenich's speeches and deeds ) also used the term Android.

Androids have been regularly described in science fiction literature and futurology since the 20th century . At the beginning of the 21st century , real androids such as the Repliee Q1 (2003) were developed again. 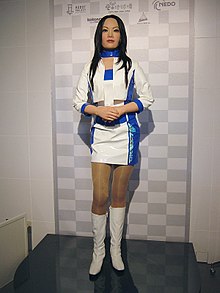 The main difference between an android and another humanoid robot is that it has an even more human-like physique and human facial features . Ideally, the android is made of material similar to human tissue, including a skin-like shell.

A more abstract distinction between androids and other humanoid robots is made by considering the uncanny valley phenomenon. This measures the acceptance that a human observer shows towards robots that are more or less similar to humans. If a (humanoid) robot is clearly recognizable as such and if it has human characteristics, this is perceived as pleasant and positive. But if the resemblance to humans continues to increase, then the observer begins to judge the alleged deficits (in the ability to move, in the language etc.) according to actual human standards and acceptance decreases (the uncanny valley ). Only with increasing human resemblance and increasing perfection does acceptance rise again. In this area of ​​high human resemblance, one speaks of androids .

What distinguishes the android from a mechanical doll is its particularly well-developed ability to move like a person and to react to external stimuli.

Androids are popular elements of science fiction not only because of their dramaturgical potential . Their simple portrayal by human actors also made them attractive characters for film and television in the past .

In general, a development in the representation of artificial people can be seen. While androids were primarily purely logical, completely emotionless and therefore threatening beings in the 1950s and 1960s, in the following decades they were portrayed increasingly human. Although they continued to frequently act as antagonists , they were increasingly emotional enemies who could experience love and hate, affection and contempt.

This development is particularly consistent in the Star Trek series. While in the original series Raumschiff Enterprise (TOS, 1966–1969) androids and artificial intelligence were consistently portrayed as a callous threat, in Raumschiff Enterprise - The Next Century (TNG, 1987–1994) with Data, an android appeared as a crew member and popular figure in some episodes and in the Star Trek movies even has emotions (through an "emotion chip"). If the holographic doctor from Star Trek: Spaceship Voyager (VOY, 1995-2001) is understood as an android, despite his not permanently physical body, he marks the end of this development of the androids towards the human. The Android is no longer just - as was previously the case with Data - legally and socially equal to the humanoid crew members, but also has a completely human personality with all the accompanying symptoms such as anger or vanity.

Androids are often portrayed as an outwardly almost perfect imitation of humans, which is why they are not recognized as Android by other characters. In Battlestar Galactica (2003) the physical and even psychological similarity goes to the point where the androids do not know about themselves that they are androids. In the Director's Cut of Blade Runner (1982) it is not clear whether the protagonist is an android or not. The truth remains hidden even from the viewer.

Examples in film and television

In Germany, according to Section 131 of the Criminal Code (StGB), the representation of violence against “human-like beings” has been on an equal footing with that against people since April 1, 2004. Thus, the representation of violence against androids, which fall under this term, is punishable as long as they depict "cruel or otherwise inhuman acts of violence" against them "in a way that glorifies or belittles such violent acts or that expresses the cruel or inhuman nature of the Represents a process in a way that violates human dignity ”.