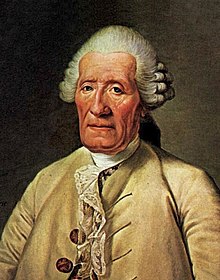 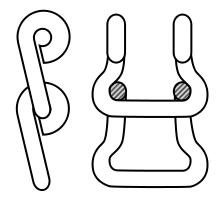 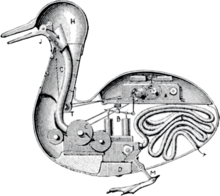 Jacques Vaucanson (the particle “de” was added later by the Académie des Sciences ) grew up in a poor family as the son of a glove maker and wanted to be a watchmaker in his youth . He attended a Jesuit college and had the idea of joining the Minimi order in Lyon , but then decided on a career as an engineer .

In 1741 he was by Cardinal Fleury , the first minister of King Louis XV. , appointed chief inspector of French silk manufacturers. In this role he drove machine production and built the first fully automatic loom in 1745 . However, the loom received little attention and was optimized by Joseph-Marie Jacquard in 1805 . He installed various mechanical components from already known looms, replaced the existing drive cylinder with a prism and integrated a system that could be programmed using punch cards . From 1815 this loom was mainly used in France and revolutionized the textile industry.

Vaucanson became famous as a designer of automata . He was a favorite of King Louis XV. and consulted doctors and surgeons on the construction of artificial people. In 1737 he built a mechanical flute player that had a repertoire of twelve songs and was based on a mechanical pin roller with two directions of movement. He moved in the usual rotation and was able to perform additional movements to the side, which were caused by a worm gear. Several rows of pens lay over the roller. In 1738 he introduced him to the French Academy of Sciences. Vaucanson's dream was to create an artificial human that would function as accurately as possible.

However, his mechanical duck is considered his masterpiece . It consisted of more than 400 moving parts, could flap its wings, chatter and drink water . It even had an artificial digestive system: it “digested” grains that it picked up in a chemical reaction in an artificial intestine and then excreted them in a natural consistency. With the gut of his duck, Vaucanson also created what is probably the first flexible rubber hose. This duck, the flute player and also a drummer were bought by the French government in 1808 from the art cabinet of Gottfried Christoph Beireis . The value of the machines has been estimated at more than 800,000 livres.

Frederick the Great invited Vaucanson with his automaton to visit him at his court, but Vaucanson rejected this request as a French patriot . In 1743 he sold his machines. In 1746 Vaucanson became a member of the Académie des Sciences , which earned him the elevation to the French nobility. No original of Vaucanson's machines has survived.

In 1748 the mechanical creatures can be found in Augsburg:

"With the gracious permission of a high authority, the 3rd moor, so famous all over Europe and admired by Mr. Vaucanson, a member of the Royal. French Academy of Sciences, invented and manufactured, to be seen for the first time. This 3rd mechanical art = pieces which seem to surpass human understanding and whose value can only be seen and explained by great connoisseurs, contain in their internal structure a connection between many arts and sciences, but mainly they are masterpieces of anatomy, Physic, Mechanic and Music. Connoisseurs will find use and pleasure in this, but curious lovers will be amazed. The first figure represents a seated man the size of Holtz, who is II. Blowing different arias on the flute traverse, with just the comfort and skill as this instrument requires, and with the same air in the mouth = hole, gripping of notes, movement of fingers, lips and tongue, as a living person is used to doing. The 2nd is a man = person from a cardboard cover, who blows different arias on a pipe, like the one in Provence, and is the heaviest blowing instrument, besides touching the drum with one hand, also blowing like a living person. The 3rd figure is a duck, made of gold-plated brass and steel, which imitates all the movements a living duck makes, the food and the like of itself. Drinking, swallowing, digesting, and again, like a good droppings from itself, no less flaps its wings up, under itself and to the side, curses and does everything that a natural duck can do. It is impossible to close everything so precisely describe when it is actually in the work and shows itself in the work, so only this is added, that on a single duck = wings there are 400 parts and special dissections. Whoever wants to see this machine, which imitates nature, has access every day in the afternoon at 3 and 5 a.m. for a fee of 36 kr. in the front = and 18. kr. in the back seat; between this time one is respectful to the inner structure, etc. Composition of their machines, in addition to a small interpretation to show what each person, when an adequate number is available, 36. kr. especially to be shot; Standes = people and other noble families will be seen appropriately at any time, in the morning or in the evening, and remuneration will be left to their own generosity. [...] "