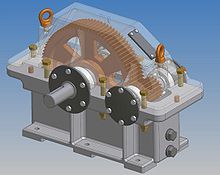 A gearbox with the upper part removed

Gearboxes usually have a complex shape and are often cast , but less often welded . The housing must help dampen noises and vibrations and be able to safely absorb lubricant . The lubrication of the wheels and bearings can be carried out as splash lubrication in an oil bath or as grease lubrication (the wheels of belt and friction gear drives, which remain unlubricated, are an exception to this). The lubricants used are lubricating oil , hydraulic oil or lubricating grease , for which appropriate devices are integrated in the gearbox housing. The gear housing also has to protect the wheels (possibly cam disks), bearings and lubricant against dust, water and other foreign matter. Sealing elements such as shaft sealing rings and O-rings are used to prevent lubricant from escaping from the gearbox housing .

With regard to the choice of materials for gear housings, lamellar gray cast iron is widely used for gear drives ; Graphite cast and cast steel can be an alternative. Housings for vehicle transmissions often get light metal - cast alloys , such as in magnesium - silicon - or aluminum basis used, as this is about the VW Beetle has been applied.