This article deals with technical systems for cooling; for the terminal moraine arc cooling in Mecklenburg see cooling (mountain range) ; for cooling a part of the body after an injury, see the PECH rule . For the Prussian major general see Gabriel von Kühlen .

Cooling or cooling down is a process in which heat or thermal energy is extracted from a system or object . Cooling is therefore also referred to as cooling .

In technology, cooling refers to all measures that serve to dissipate the resulting heat loss from technical components to the environment. Desired cooling is used to protect against overheating , to achieve and maintain certain temperature-dependent properties or for preservation purposes in the case of biomaterial.

Unwanted heat extraction can be compensated for by insulation or warming, whereby living beings are referred to as hypothermia or frostbite .

With solids and liquids, heat is extracted through heat transfer according to a temperature gradient . The main processes are thermal conduction and thermal radiation , and to a limited extent also convection . The most effective type with the greatest power density is evaporative cooling .

Since all these processes take place spontaneously and consequently result in temperature equalization in accordance with the basic laws of thermodynamics , an artificially desired cooling of an object against a temperature gradient can only take place with a high expenditure of energy. Overall, however, this will always result in an increase in the total entropy and thus generally in a conversion of higher-order forms of energy into thermal energy. Cooling in the sense of reducing the thermal energy of a closed system is therefore not possible, which in practice is expressed, for example, in the fact that refrigerators also ultimately increase the temperature (of the environment) and not lower it, even if this may also be the case locally .

The different processes of heat transfer are characteristic of certain situations. For example, convection does not play a role in solids; heat conduction and heat radiation dominate here. This can be seen, for example, in the appearance of the earth's surface . The decisive influencing factors are given by the coefficient of thermal conductivity , the heat transfer coefficient and the heat capacity .

In the case of liquids, heat conduction and heat radiation also play a role, but convection is an essential process of temperature equalization.

In contrast, this dominates in the case of gases, although these generally only cool down very poorly via processes of heat conduction. However, they are subject to different gas laws , which means that adiabatic cooling and the Joule-Thomson effect play a major role. These are of particular importance in the atmosphere when air parcels cool or warm up during vertical movements according to the atmospheric temperature gradient . Via condensation and resublimation processes , the associated cooling is an essential factor in the formation of precipitation and the weather in general.

The cooling output is similar to the electrical output, indicating how much thermal energy is dissipated per unit of time . Correspondingly, the heat flow is the heat output flowing through per unit area .

A distinction is made between the following types of cooling for oil-filled devices:

When it is possible to switch between these cooling variants by switching fans or pumps on and off, we speak of operating modes. This changes the cooling performance. The switchover should be automated in order to be able to adapt the cooling capacity to the respective amount of heat to be dissipated.

The following table shows the structure of the anode and the maximum specific load capacity using the example of transmitter tubes for different types of cooling.

By far the greatest load capacity results from evaporative cooling. A great deal of energy is used to evaporate the liquid cooling medium in order to be able to deliver a high power density to the coolant (mostly water). This principle of evaporative cooling is used, for example, in water-cooled car gasoline engines in order to limit the temperature very effectively. 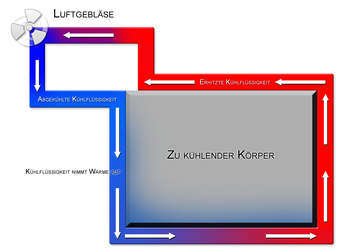 Example of a simple water cooling

Cooling systems can be divided according to the heat transfer medium used. The most common types of cooling are:

Cooling is mostly based on the transfer of heat from the body to be cooled to the coolant (gas or liquid) and its transport ( heat flow ) .

In some applications with limited space (inside a computer or hi-fi amplifier ), heat pipes are used for removal .

Most engines have a special coolant.

Cooling is used in many technical devices that heat up. In most cases, however, passive cooling is used, i.e. the dissipation of heat into the surrounding air via heat sinks .

The best-known example is the refrigerator for preserving food. Water cooling is mostly used in motor vehicles, while air cooling is predominantly used in computers. Another large area of ​​application is z. B. the air conditioning .