The title of this article is ambiguous. Further meanings are listed under Aden (disambiguation) .

Aden on a wood engraving by Daniel Meisner (1638) 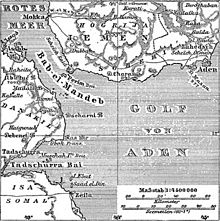 Historical map of the region (around 1888)

Aden ( Arabic عدن, DMG ʿAdan [ˈʕɑdæn] ) is the fourth largest city in Yemen with 568,704 inhabitants. From 1967 to 1990 it was the capital of the People's Democratic Republic of Yemen . On March 21, 2015, Aden was declared the interim capital of Yemen by President Abed Rabbo Mansur Hadi , as the capital Sana'a was occupied by Houthi rebels .

Aden is a port city on the Gulf of Aden . Less than 200 km to the west is the Bab al-Mandab , the strait that connects the Gulf of Aden with the Red Sea . The oldest part of the city is located in a volcanic crater and is therefore called Kraytar . The port is dominated by the 517 meter high Jebel Shamsan volcano.

Aden was already in the 8th century BC. It was an important trading port under the ancient empires of Ausan and Saba . After a period of decline starting in the 3rd century, the city experienced a great economic boom again under the Ayyubids and Rasulids in the 12th century when it became a trading center for trade between India and Egypt during the Ayyubid and Mamluk era . According to Marco Polo , 80,000 people are said to have lived in Aden.

In the 16th century, with the relocation of trade routes, the city began to decline. On February 26th, 1548 Piri Reis succeeded , that of the Portuguese King John III. to conquer occupied Aden for the Ottoman Empire . By 1838 the population had dropped to 600.

On January 16, 1839, Great Britain conquered the town on a peninsula , which at the time was still an insignificant village. It was fortified and expanded into an important coal and goods depot for ships . The strategic importance of the port, which was the only deep-sea port on the South Arabian coast with the introduction of steam shipping, resulted from trade relations with India ( India trade ). England placed the city under government in Bombay , but in 1864 the local resident was given extensive government powers.

Since the Suez Canal opened in 1869, the city has grown in importance as an important naval station (central British military base) was located in the city that could have blocked the entrance to the Red Sea . Aden also flourished as a trading port and was soon the third largest seaport of its time. On April 1, 1937, the city was raised to the status of its own crown colony as "Colony Aden" and was detached from the British Presidency of Bombay in India. Between 1963 and 1967 Aden was part of the South Arab Federation as the "State of Aden" .

The once large Jewish community of Aden was expelled or evacuated in the course of the pogrom of 1947 . Aden achieved independence from Great Britain with South Yemen in 1967 and also became the capital of the new state. But in the same year the Suez Canal was blocked by the Six Day War , which made the port of Aden less important for international shipping. When the Suez Canal reopened eight years later, other port cities had taken over the role of Aden.

Tawahi ( Arabic التواهي, DMG at-Tawāhī ) is a district of Aden. During the British colonial era, Tawahi became the city's posh district. The quarter also includes “Steamer Point”, a colonial port for passenger ships and tankers. Today most of the tourist hotels are located in this urban area.

Crater (also: Kraytar) , ( Arabic كريتر) is the unofficial name of a district of Adens located in the crater of an extinct volcano. The official name of the district is Ṣīra (Seera) ( Arabic صيرة). This part of the city is home to around 70,000 residents.

The Tawila cisterns are located in Crater as historically significant sights from the Himyarian period . Originally 53 cisterns were dug into the mountain and connected to each other by a system of canals. Over the centuries, they largely fell into disrepair and were filled with rubble and trash. From the middle of the 19th century, they were partially restored at the instigation of British colonial officials, so that today 17 cisterns can collect rainwater of up to 100,000 m³ from the Shamsan massif.

Other districts are al-Muʿalla (at the north foot of the volcano) and Khor Maksar with the Aden airport and the rapidly expanding Shaykh Uthmān (university district and the “Aden Free Zone” and container port).

When pogrom in Aden in 1947, the historical was Shield of Abraham Synagogue destroyed.

During the hijacking of the "Landshut" aircraft , which began on October 13, 1977, Aden was the hijackers' penultimate stopover. Because the Aden's government refused to interact with terrorists, contrary to what the kidnappers planned, the runway was blocked by the government. Since the Landshut only had fuel for a 20-minute flight, the pilots were forced to land in the sand next to the runway.

On October 12, 2000, the destroyer USS Cole (DDG-67) moored in the port of Aden for bunkering. When he was picking up fuel not far from the landing stage, a boat loaded with explosives set course for the destroyer in the late morning and detonated amidships, at the level of the engine rooms and the mess. This tore a nine by twelve meter hole in the hull. 17 members of the US Navy were killed in the attack and 39 others were injured.

On December 18, 2016, a suicide bomber blew himself up near a military base where soldiers had gathered to collect their pay . At least 42 people were killed as a result.