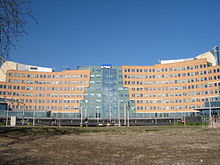 KPMG International is a global network of legally autonomous and independent companies in the fields of auditing , tax consulting and corporate and management consulting based in Zug and operating headquarters in Amstelveen .

KPMG is one of the four accounting firms with the highest turnover in the world and is therefore one of the so-called Big Four .

KPMG was created through the merger of legally autonomous and independent auditing and consulting firms from the Netherlands , Great Britain , the United States and Germany . The letters give an indication of the founders and chairmen of these companies: 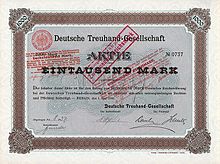 Share over 1000 marks in the Deutsche Treuhand-Gesellschaft from June 1, 1900

In 1986 PMI and KMG merged in the first mega-merger of the large audit firms. The new company was named KPMG in 1987 . Ten years later, in 1997, KPMG and Ernst & Young negotiated a merger. This was widely seen as a reaction to the recent merger of Price Waterhouse and Coopers & Lybrand to form PricewaterhouseCoopers . While the PricewaterhouseCoopers merger was approved by regulators, KPMG and Ernst & Young ended their merger talks in October 1997 without a merger.

In order to meet the independence requirements of the Sarbanes-Oxley Act in the USA, which also had an impact on Germany , KPMG Germany completely separated from its stake in KPMG Consulting AG in 2002 and sold the shares to KPMG Consulting, Inc. USA, which has since been known as BearingPoint acts. In the same year KPMG sold the Actuarial Services division to Mercer Human Resource Consulting GmbH . In addition, the separation from the law firm Beiten Burkhardt took effect on October 1, 2003 .

Since October 1, 2008, KPMG Germany has been operating as KPMG AG Wirtschaftsprüfungsgesellschaft .

All national KPMG companies are associated with this company, which is responsible for strategic alignment and brand development, among other things.

KPMG Europe LLP (KPMG Europe) is the coordinating parent company of the KPMG network in Europe and Saudi Arabia .

The member companies from Germany, Great Britain and Switzerland merged on October 1, 2007 to form KPMG Europe LLP . The group company is registered in London , the head office is in Frankfurt am Main . Co-chairmen are Rolf Nonnenmacher and John Griffith-Jones.

A selection of national KPMG companies:

In Germany, KPMG has 16 DAX mandates, making it a leader in banking and industry.

A selection of major customers:

KPMG also reviews the annual accounts of the Wikimedia Foundation .

KPMG in the public eye

Just like other auditing firms, KPMG has repeatedly come into the public eye as an auditor if companies have retrospectively revealed accounting errors due to manipulation by top management. KPMG has always rejected allegations of not having carried out the audit properly in individual cases or even of being involved in manipulation.

In early 2005, the US company KPMG LLP and a number of high-ranking employees were charged with aiding and abetting tax evasion in the amount of US $ 2.5 billion. The lawsuit was dropped in 2007 after KPMG complied with a stay of prosecution agreement; Under this agreement, KPMG acknowledged fraudulent conduct and agreed to pay $ 456 million.

In 2005 the company received the negative Public Eye Award .

In 2007, the responsible auditor at KPMG, Marco Aurélio Diniz Maciel, was found guilty of the scandal surrounding the falsification of financial statements at Banco Nacional in Brazil .

In April 2013, the partner responsible for the final exam at the Los Angeles site, Scott London, admitted that he had passed on inside information to his friend Bryan Shaw. Since 2010 he had disclosed unknown information to the public about KPMG clients Herbalife , Skechers and other companies. In return, he received cash and gifts in kind. London was then released. As a result, KPMG had to resign from the Herbalife and Skechers audit mandates. Shaw and London pleaded guilty to insider trading. Shaw made at least $ 1.27 million from insider trading , according to the SEC .

In 2017, KPMG South Africa got into a crisis as a result of the scandal surrounding the Gupta family . It had become known that KPMG had advised companies in the Gupta family until 2016. In 2013, KPMG made it possible to illegally finance a wedding reception in the Gupta family. In addition, the audit by the South African Revenue Service (SARS) revealed that the then Treasury Secretary, Pravin Gordhan, knew about an illegal espionage unit within the agency. As a result, Gordhan was released. After the allegations against KPMG became known, numerous companies, including Barclays South Africa, and the government terminated their contracts with the company. The Chief Executive of KPMG South Africa and other executives had to resign. In addition, VBS Mutual Bank had collapsed on fraud allegations in 2018 , despite KPMG's positive audit report in 2017.

In his program yesterday this morning from 2017, the cabaret artist Urban Priol translated KPMG with Children Check My Business . There are other word games circulating on the Internet - alluding to KPMG's business practices - such as Coming Checking Grumbling Going .