The HMS Invincible (from English invincible , invincible ' ) was the oldest of the three British aircraft carriers of the Invincible class named after her and the flagship of the Royal Navy . She was on the Vickers -Werft in Barrow-in-Furness on keel laid and after four years of construction of Queen Elizabeth II. On March 3, 1977 baptized . The Invincible was decommissioned on August 3, 2005 in the port of Portsmouth and managed as a reserve ship until September 10, 2010 . In February 2011 it was sold to a Turkish recycling company.

The Invincible was the first aircraft carrier in the world that was intended from the start as a so-called STOVL carrier for the use of vertical take- offs. Therefore, the ship was not equipped with launch catapults or safety ropes. However, it had a so-called ski jump, a kind of ski jump over which the planes took off. Fighter aircraft of the type Hawker Siddeley Harrier were used . While both the principle of the STOVL carrier and the Harrier were not always taken seriously at first, the Royal Navy demonstrated the effectiveness of these systems in the Falklands War .

The Invincible was originally assigned to a permanent Carrier Air Group (CAG). This usually consisted of 16 combat aircraft and four helicopters, with an increase of two more helicopters possible. The CAG was originally composed as follows:

From the mid-1990s, the Royal Navy began to replace the Carrier Air Groups, which were permanently assigned to the aircraft carriers, with flexible Tailored Air Groups. This means that the number and type of aircraft and helicopters have been adapted to the individual requirements of a mission. 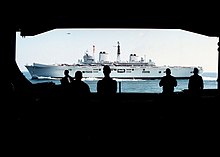 While the carrier was still on test drives in the North Atlantic , the Falklands War broke out in 1982 . Together with the aircraft carrier HMS Hermes , the ship was sent to the South Atlantic to support the British recapture of the islands. Within a short time, the 20 Sea Harriers stationed on board the two carriers - eight of them on the smaller Invincible  - succeeded in gaining air superiority over the Falkland Islands without losing a single aircraft in a dogfight. The Sea Harrier could not achieve air supremacy at any time. In the course of the war eight more Sea Harriers were stationed on the two carriers. Of the 28 Sea Harriers deployed, two were lost to the Argentine air defense and four more to accidents. In addition to the Sea Harriers, Harrier Gr. 3 embarked by the Royal Air Force, two of which were also shot down by the Argentine air defense. Another Harrier Gr. 3 was damaged by the Argentines and did not reach its carrier, while a fourth Harrier Gr. 3 was irreparably damaged by a too hard landing. The relative success of the Harrier VTOL aircraft also convinced the initial critics, which is why Great Britain decided not to sell the Invincible to Australia and bought two more ships of the class. In the years that followed, several other countries also introduced small aircraft carriers with ski jump and Harrier aircraft.

Between 1993 and 1999 the Invincible was regularly in use in the Adriatic , including during the Kosovo war . In addition, there have been regular missions in the Persian Gulf since 1991 as part of the Anglo-American Standing Naval Force ( Ocean Wave '97 ).

At the end of 2003 the carrier returned to active service after more than two years of modernization. During the renovation, the anti-aircraft guns on the bow of the ship were removed to create more space for the aircraft. In addition, the ship received the most modern communication facilities. The tonnage was increased from 20,600 to 22,000 tons.

In October 2004 the Invincible acted as the flagship of the NATO maneuver Destined Glory in the Mediterranean. The aircraft carrier also served as the command center of the newly created NATO Response Force . Between January and May 2005, the ship took part in several maneuvers in the Mediterranean and Persian Gulf. The carrier association of the Invincible consisted of twelve ships, including a French frigate. Her last major task was leading the international fleet parade in the Solent on June 28, 2005.

Negotiations about an early sale to the Indian Navy failed in the summer of 2004. On August 1, 2005, the Invincible ran for the last time in its home port of Portsmouth, where it was officially decommissioned two days later. As usual with the Royal Navy, the ship officially remained in existence for five years. She continued to be listed in their shipping register and officially had the status of a reserve ship. The Invincible was originally set to status R7 for this purpose , so that the reactivation time was 90 days. In mid-2006, however, the reactivation time was increased to 18 months and parts of the technical equipment were removed. On September 10, 2010, the ship was removed from the reserve ship list and released for sale for scrapping on November 28 of the same year.

The Invincible's retirement in 2005 sparked a debate in the UK over government austerity policies. Critics accused the Labor government of the time of wanting to offset the high costs of the Iraq war by decommissioning the carrier, which was completely overhauled in 2003 . The then Commander-in-Chief of the Royal Navy, Sir Alan West , pointed out that the efficiency of the British armed forces was decisively weakened by this step. Due to the modernization of the HMS Ark Royal, the Navy would only have a single aircraft carrier with the HMS Illustrious until the end of 2006 , so that a bottleneck was feared in the event of a crisis. The Ministry of Defense rejected this criticism as unfounded and stressed that the Invincible, as a reserve ship, could be reactivated at any time in the event of a crisis. Furthermore, the existing capacities are completely sufficient until the new aircraft carriers of the Queen Elizabeth class are commissioned from 2014.

There have been five other warships known as the HMS Invincible before in the history of the Royal Navy .

Aircraft carriers of the Invincible class