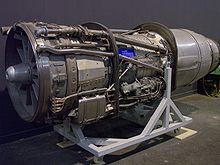 The Rolls-Royce Olympus (originally Bristol Olympus , then Bristol-Siddeley Olympus ; it was manufactured under license in the USA as the Wright J67 ) is a twin-shaft turbojet engine produced by the Bristol Aircraft Company (part of Rolls-Royce from 1966 ) was developed. Originally intended for the Avro Vulcan , it was also used in the Concorde in its final stage of development (which has an afterburner ) .

The Bristol Olympus was the first twin-shaft engine in Great Britain that was brought to series production, but despite the twin-shaft design it is not a turbofan engine with bypass flow , but a pure single- flow turbojet. Development began in the late 1940s. The first test engine (BOI.1) with a thrust of 40.67 kN ran on the test bench for the first time on May 6, 1950.

The BOI.2 was a further development that had not reached production with an expected thrust of 43.39 kN. Instead, the BOI.1 / 2, developed from the BOI.1, ran for the first time in November 1950. From this the BOI.1 / 2A was derived, which was manufactured under license from Wright as the J67 with a thrust of 43.39 kN. The compression ratio of this version was 9: 1 with an air flow rate of 75 kg / s.

The BOI.1 / 2B was the first version to be tested in flight in England. On August 5, 1952, an English Electric Canberra B.2 with such a power unit was launched. For this test, the thrust was limited to 35.6 kN. This version received the designation Mk. 99. With minor changes and a thrust of 41.16 kN, four of these engines (designation: Mk. 100) were used in the second prototype of the Avro Vulcan, which flew for the first time in September 1953.

The version BOI.1 / 2C, also called Mk. 101, was the first version that was then manufactured in large series. The first test flight with it took place in June 1954 - also in an English Electric Canberra . The acceptance run in December 1954 resulted in a thrust of 48.9 kN. Compared to the BOI.1 / 2B, the turbine housing was enlarged.

On December 14, 1954, the significantly more powerful BOI.6 engine ran for the first time and became the starting point for the Mk. 200 versions of the Olympus. The engine already delivered a thrust of 71.22 kN. The low-pressure compressor had five, the high-pressure compressor seven stages. From this the BOI.7 was derived (Mk. 201), which was used in the Avro Vulcan B Mk. 2 from July 1960. It was approved in 1958 with a thrust of 75.63 kN.

The BOI.11 (Mk. 102) was based on the BOI.1 / 2 and had a thrust of 53.40 kN. In August 1955, a Canberra equipped with two of these turbines set a new altitude record of 20,092 m. The engine was mass-produced for the Avro Vulcan. By adding a further compression stage in front of the low-pressure compressor, the BOI.12 version (Mk. 104) was created, which developed a thrust of 60.09 kN. It was used in the Avro Vulcan B Mk.1. The Mk. 102 series engines delivered up to now could be retrofitted with this additional compressor stage during later overhauls.

For the aircraft BAC TSR.2 , work was carried out on the version BOI.22R (Mk. 320), which was supposed to deliver a thrust with afterburner of 136.7 kN , until the end of this project .

The Olympus 593 was developed for the Concorde together with the SNECMA . SNECMA took over 40% of the work and developed the thrust nozzle, thrust reverser, silencer and afterburner, while Rolls-Royce's Bristol Engine Division was responsible for the fuselage engine. The first test engines with the designation 593D were put to the test in mid-1964. It was not until November 1965 that the engines intended for the Concorde prototype ran on the ground. For testing in the air, an Avro Vulcan was equipped with half a Concorde engine cowling under the fuselage.

The first engines for the Concorde were to be given the production code Mk. 601. Further developments to the Mk. 611 with higher speeds and the Mk. 621 with a modified, more efficient combustion chamber were in development in 1970. Due to further detail improvements, however, only the Mk. 610 version was used in the Concorde. The approval for civil aviation was granted in September 1975. The thrust with the afterburner was 169.2 kN. Due to the development of the civil aircraft market as a result of the oil crisis, further development was discontinued. 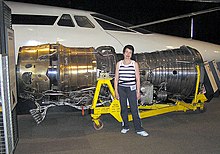 Behind the compressor there was an intermediate housing that accommodated the bearings for the compressor. Two auxiliary gears were attached to the right and left of this intermediate housing. The required power was taken from the shaft of the high pressure part. The left gearbox drove the oil and fuel pumps, the right gearbox the hydraulic pump and a generator. The oil was conducted in a closed pressure oil circuit. Various return pumps were used in the engine for this purpose. The oil was cooled in an oil-fuel heat exchanger. The mechanically driven fuel pump not only supplied the engine, but also the afterburner. A second fuel pump powered by an air turbine was available for take-off and climb in order to cover the increased fuel demand. The engine was also started by an air turbine that set the high-pressure part in rotation.

The one-piece, self-supporting ring combustion chamber was made of a highly heat-resistant nickel alloy that was also electrochemically processed. There were 16 double injectors in it. All connection flanges and fastenings were made using the butt welding process. A double high-voltage ignition system was located in the combustion chamber for starting.

The high pressure turbine was designed as a single stage. The blades of both its stator and rotor - like those of the low-pressure turbine - were cooled with air. The thrust nozzle was straight and had a convergent / divergent adjustment system with integrated thrust reverser. The afterburner was fueled by a single injector ring. Jet A or Jet A1 were intended as fuel .

The engine control used by Lucas was the first FADEC in civil aviation that was ready for use .

Rolls-Royce Olympus for marine use

A version for marine use was also developed from this engine. Between 1966 and 1968, the frigate HMS Exmouth was converted to gas turbine propulsion as a test vehicle. The turbine has proven itself in the Royal Navy and was also used in the Amazon- class frigates , the Invincible-class aircraft carriers , the Sheffield-class destroyers and the Broadsword-class guided missile frigates .

In addition, the turbine was also used by the naval forces of France, Belgium, the Netherlands and Finland. The shaft power was up to 18,400 kW.

Jet engines (turbojets) of the US armed forces