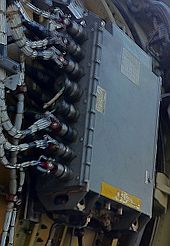 FADEC on a jet engine

A full authority digital engine control ( FADEC ) is generally understood in aviation to mean an autonomous, fully digital engine control. This means that the complete regulation and control of jet or piston engines takes place within the FADEC. Components contained in the engine, such as the guide vane adjustment, devices for fuel metering or housing cooling, are checked by FADEC. In contrast to a simple motor control ( English engine control unit , ECU), the higher-level control systems for the operation required, a FADEC can control the engine in all operating states independently.

In civil aviation, communication between flight control and FADEC takes place via the standardized serial protocol ARINC 429 . This ARINC-429 protocol is also used to communicate with other components in the aircraft, so it is not limited to the engine.

The main manipulated variable for the engine thrust can be the EPR (Engine Pressure Ratio), the pressure ratio of the air expelled by the turbine to the air sucked in by the compressor, or the fan speed corrected for ambient conditions. However, there are many different control loops that can be adapted to the necessary application of the engine. So a different control loop is required during the starting process than when the engine is running steadily at idle speed and then z. B. the high pressure compressor outlet pressure or the physical high pressure compressor speed is monitored.

Another positive side effect is the greatly improved control over the condition of an engine. The data are recorded and stored centrally or are transmitted to the maintenance base during flight operations ( telemetry ) and necessary repairs are reduced to a minimum.

The development of this technology was a contribution to the 2-man cockpit, the flight engineer required earlier could be saved. The main task of the flight engineer was to monitor and control the engines. With FADEC, a computer now monitors the commands to the engine; the pilots can now regulate the thrust themselves in every situation, without abrupt or rash commands damaging the engine or endangering flight safety.

The leading manufacturers of such regulations in civil aviation are Hamilton Sundstrand for Pratt & Whitney and IAE . Components from BAE Systems are used for the engines from General Electric or CFM International . In Germany, MTU Aero Engines develops and produces the control for the Eurofighter .