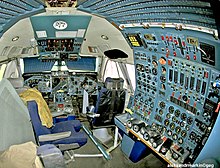 Workplace of a flight engineer on board Ilyushin Il-86

A flight engineer (also known as a flight engineer or second officer) is a cockpit member and belongs to the minimum crew of older, large commercial aircraft with a three-person cockpit . In addition to the captain ( commander ) and the co-pilot (also called first officer), he is the third crew member in the cockpit. In Germany, an independent two and a half year training course, which requires at least a degree from a technical college , leads to a flight engineering license.

The flight engineer is responsible for monitoring and operating the aircraft systems such as the pressurized cabin, the fuel supply and the engines. In the event of an error, he will remedy the situation. He reads checklists and carries out technical checks on the aircraft on the ground and in the air. Since the 1980s, due to the progressive automation of the cockpits , the tasks of flight engineer have largely been performed by the pilots.

At the beginning of aviation, in addition to the pilots, other personnel were necessary to operate large and complex aircraft. In the early years of aviation, long-haul flights had a radio operator on board who was responsible for communication. This was soon possible for the pilots themselves through improved and simplified radio equipment. Until the mid-1960s , the navigator had taken great effort to determine the position of the aircraft over the oceans, but over time navigation systems such as inertial navigation system (INS) and flight management system (FMS) took over. The technical progress in the cockpit led to constant improvements in the support of the pilots, but initially not to the elimination of the flight engineer. In 1981 in the Boeing 767 , in 1982 with the Airbus A310 and in 1987 with the introduction of the Airbus A320 , the computer found its way into the cockpit. The routine work in normal operation has been significantly reduced, but the complexity has increased. It was not long before the large commercial aircraft such as the Boeing 747 and Airbus A340 were also equipped with these technologies. Systems such as EICAS provided the pilot with information about the various aircraft systems, so that from now on the two pilots could take on the tasks of flight engineers.

Today flight engineers are only used in the operation of older aircraft types or special aircraft such as heavy transporters. No flight engineers, but on-board technicians or flight technicians entrusted with similar tasks are still employed in military aviation , the police and air rescue .

A flight engineer may only be active in the transport of passengers if he was active on a flight as a flight engineer on an aircraft or flight simulator of the same type within the previous 90 days. The type ratings are valid for one year. For the extension you need: