Catapult launch of an F / A-18 Hornet

Aircraft catapults (also outdated aircraft slingshots ) are used in aviation as a starting aid device when aircraft cannot reach the required take-off speed by their own power. This can be the case if, for example, the runway is too short or the propulsion power of the aircraft is too weak for take-off. Such catapults are most frequently used on aircraft carriers , since the fighter jets used there cannot achieve sufficient lift on the extremely short take-off routes without support . 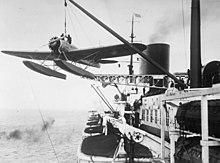 The concept of the first catapult operated with compressed air originated in 1916 and had been developed by the German naval chief engineer Wilhelm Stein. In the autumn of 1918, several attempts were made with a W.29 seaplane , but they were not pursued any further at the end of the First World War . Stein got a job as operations director at the aircraft manufacturer Heinkel , where he continued to work on the principle of the air-powered ship catapult . Several models and specially developed aircraft types were created. In 1927 the HD 15 was successfully tested together with the K-1 catapult for the first time. It consisted of a launch rail on which a launch slide ran and on which the aircraft was placed. At the start, the sled was accelerated to around 100 km / h by means of compressed air and steel cables and then braked again at the end of the runway, with the aircraft disengaging from the catapult. Heinkel's flying boats and catapults were used in the following years on both war and civilian ships ( catapult ships ) and were also exported abroad, such as the HD 55 flying boat . Until the 1930s, Heinkel dominated catapult construction worldwide.

The development of steam catapults began in the 1930s when float planes and flying boats were supposed to be launched from ships without first launching them into the water. The first were used from 1934 on catapult ships like the Schwabenland . The steam was supplied by the ship's propulsion system. Alternatively, the steam could also be generated using a hydrogen peroxide steam generator.

Later, missiles were launched by slingshots, such as the Fieseler Fi 103 . Modern aircraft could no longer take off conventionally (i.e. without assistance) from aircraft decks because the roll speed and excess travel of the carrier were no longer sufficient to achieve the minimum airspeed that the increasingly heavy modern aircraft needed for lift. That is why steam launch catapults were used there.

The steam catapults in the form known today were developed by the Royal Navy from slingshots of the German Fieseler Fi 103 captured in World War II and tested on the HMS Perseus in 1950 . The United States Navy took over the new aircraft catapult technology from the Royal Navy, and then other navies equipped their aircraft carriers with steam catapults.

The total of four aircraft catapults are exposed in dry dock on the USS Abraham Lincoln and can be easily seen. 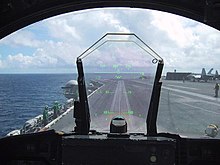 An F / A-18F Super Hornet launched from the Kitty Hawk

For this purpose, a rail is embedded in the floor of the flight deck , on which a slide is accelerated by means of steam pressure. In the case of nuclear-powered aircraft carriers, this steam is taken directly from the secondary circuit of the reactor . A fold-out connector on the front wheel of the aircraft ensures the power transmission. The aircraft moves up to the slide until the connector is locked. The catapult then pulls briefly so that there is tension between the aircraft and the sled and no sudden jerk could damage the nose wheel.

The pressure of the steam catapult is adjusted to the weight of the aircraft so that the required speed for the lift at the end of the runway can be achieved.

Before take-off, the aircraft is first held in its position by a holding rod until sufficient steam pressure has been built up and the engines have reached maximum thrust. Then the bracket is released and the aircraft accelerates very strongly until its wings generate sufficient lift.

The sledge is braked as quickly as possible at the end of the runway. This is done via a long cone at the front of the slide, which penetrates a pipe filled with water at the end of the catapult path. Thanks to the cone shape and the resulting increase in water displacement, the braking effect also increases quickly and brings the slide to a standstill. The slide is then withdrawn to its starting position for the next start.

Since the beginning of the 21st century , electromagnetically operated catapults have also been researched. The US Navy is currently equipping its aircraft carriers with electromagnetic catapults ( Electromagnetic Aircraft Launch System , EMALS ), which use linear motors similar to those of the Transrapid . The slide is accelerated by alternating magnetic fields. Due to the more precise mode of action, better starting conditions can also be achieved with these systems. Reliable application of high electrical power for a short time requires a storage system such as a combination of flywheel and generator.