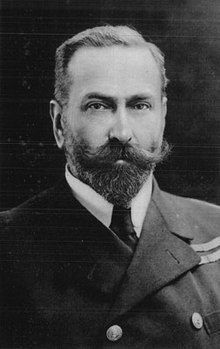 Louis Mountbatten, 1st Marquess of Milford Haven , GCB , GCMG , GCVO , PC , born as Prince Ludwig Alexander von Battenberg (born May 24, 1854 in Graz , † September 11, 1921 in London ), was a British admiral of Hessian origin, who served as the First Sea Lord from 1912 to 1914 . One of his grandchildren is Prince Philip , consort of Queen Elizabeth II.

Prince Ludwig Alexander von Battenberg was the second oldest of five children of Prince Alexander von Hessen-Darmstadt (1823–1888) and Countess Julia Hauke (1825–1895). Since their marriage was considered morganatic , Julia Hauke ​​did not become a member of the House of Hesse through her marriage , but received from her brother-in-law, Grand Duke Ludwig III. of Hesse and the Rhine , the orphaned title of Countess of Battenberg since 1310 . As this also applied to their children, who were not entitled to inherit the succession to the throne of the Hessian Grand Duchy , the second Battenberg House was created . Julia Hauke ​​was later raised to the Hessian prince status, her descendants thus received the title of prince or princess .

Prince Ludwig Alexander von Battenberg was born in Graz in 1854 , where his father was stationed as an officer in the Imperial and Royal Army . He spent his childhood at Heiligenberg Castle in Hesse . Influenced by his in-law cousin Princess Alice of Great Britain and her brother Admiral Alfred, Duke of Edinburgh , two children of Queen Victoria , Battenberg decided in 1868 at the age of fourteen to pursue a career as a naval officer.

Prince Ludwig Alexander went to Great Britain, was naturalized as a British subject (he often wrote himself "Prince Louis of Battenberg" since then) and entered the Royal Navy on October 3, 1868 , where he was initially assigned to Nelson's former flagship HMS Victory . After further assignments, which took him to North America , India , South Africa and the West Indies , he was transferred to the royal yacht HMY Victoria and Albert II in September 1883 and married in 1884. In the following year his younger brother Heinrich (“Prince Henry of Battenberg ”) to Great Britain, who married Princess Beatrice (youngest daughter of Queen Victoria and Prince Consort Albert ). Between 1885 and 1902, Prince Ludwig served on numerous other warships, including in the Mediterranean , before he was appointed Director of Naval Intelligence in 1902.

In 1904 he was promoted to Rear Admiral and became commander of the 2nd British Cruiser Squadron, with which he visited Greece , Portugal , Canada and the United States and whose effectiveness he was able to improve significantly through new training methods. In 1908 Battenberg was promoted to Vice Admiral and took command of the British Atlantic Fleet . In the conflict between the First Sea Lord Sir John Fisher and Admiral Lord Charles Beresford , who employed the Royal Navy internally at the beginning of the 20th century, Battenberg was generally counted among the supporters of Fisher. Fisher and Beresford were seasoned naval officers, but had different views on the reform of the fleet and the future of the Royal Navy. In addition, class differences between the social climber Fisher and the aristocratic Beresford played a role, which also came about that Beresford wanted to become First Sea Lord himself and Fisher viewed as a career obstacle. The rivalry ended when Beresford returned to the House of Commons in 1909 and Fisher resigned from his position in 1910. In December 1911 Battenberg himself was appointed to the Admiralty and, as Second Sea Lord, was responsible for the personnel matters of the Royal Navy.

In December 1912, Battenberg finally became First Sea Lord. He held the highest position in the Navy, while he was First Lord of the Admiralty on the political side against Winston Churchill . As Commander-in-Chief of the Royal Navy, Battenberg dealt in the following years primarily with strengthening the fleet's clout and preparing it for a war mission. With the outbreak of the First World War , however, he came under increasing criticism. The British press stirred up an anti-German mood in the country, and Lord Charles Beresford was able to position this against Battenberg in influential circles. Because of his German ancestry (more precisely: under pressure from public opinion that a "German" could not reliably command the Royal Navy and represent British interests), Churchill finally urged the First Sea Lord on October 27, 1914 to resign.

Battenberg's departure met with consternation from both politicians and the Royal Navy, and King George V expressed his support by making Battenberg a member of the Privy Council . During the First World War, he retired to the Isle of Wight , where he wrote several books.

When King George V renounced all German titles for himself and his family in July 1917 and called on his relatives to do the same, Admiral Prince Ludwig Alexander von Battenberg also gave up all his Hessian titles and dignities on July 14, 1917. He took the surname Mountbatten and on the same day received the hereditary titles of nobility Marquess of Milford Haven , Earl of Medina and Viscount Alderney , in the County of Southampton. A seat in the House of Lords was associated with these titles .

In 1918 he was also formally discharged from the Royal Navy against his will, and in 1919 he was forced to sell both his Kent House residence and his collection of military medals for financial reasons. In 1920 he also sold his parents' house, Heiligenberg Castle in Hesse . He was also the beginning of 1921 Knight Grand Cross of the Order of the Bath in the military class and was established in August to Grand Admiral (Admiral of the Fleet) appointed. A month later he died in London of heart failure due to influenza . He was buried in Whippingham on the Isle of Wight.

While Battenberg was a member of the crew of the royal yacht Victoria and Albert , he married his cousin (second degree), Princess Viktoria von Hessen-Darmstadt (1863-1950) in Darmstadt on April 30, 1884 . She was the eldest daughter of Grand Duke Ludwig IV and Princess Alice of Great Britain and Ireland and thus a granddaughter of Queen Victoria . Because of these relationships, the Battenbergs were related to the British royal family . The marriage, which all reports said was a happy one, had four children: 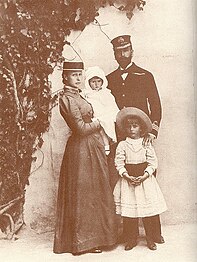 In 1880, Battenberg had a relationship with the famous actress Lillie Langtry , who had previously been the mistress of the Prince of Wales (later King Edward VII) . Lillie became pregnant by him and gave birth to their only daughter Jeanne-Marie on March 8, 1881 in Paris . The birth remained a secret and the child grew up partly on Jersey, her mother was her "aunt" for her. Even after the birth of his legitimate children, Battenberg paid alimony for Jeanne-Marie.

Name and title in different phases of life