from Wikipedia, the free encyclopedia
This is the spotted version , flagged on February 27, 2020 . There is 1 pending change that has yet to be viewed.

Aon is a UK based London based company active in the insurance and risk management industries.

The company is listed on the New York Stock Exchange and on the S&P 500 stock index. It employs over 66,000 people internationally.

The company's second most important location is in Chicago in the Aon Center , which was also the headquarters until 2012. In Los Angeles , the company's employees work at the city's Aon Center . 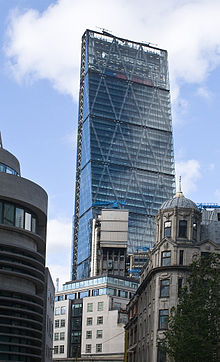 Administration building at the headquarters in London

Aon Corporation was formed in 1982 from the merger of the US insurance company Ryan Insurance Group (founded by Pat Ryan in the 1960s) and Combined International Corporation (founded by W. Clement Stone in 1919).

In the terrorist attacks on September 11, 2001 , 175 company employees died in the southern skyscraper of the World Trade Center .

In August 2008 the company acquired the British insurance company Benfield Group from London. Aon Jauch & Hübener in Hamburg is a subsidiary in Germany .

In October 2010, the $ 4.9 billion acquisition of Hewitt Associates was completed.

At the beginning of 2012, the company relocated its headquarters and corporate management to London . There the company moved into 10 of the 48 floors of the 225-meter-high Leadenhall Building (also known as "The Cheesegrater"). The part of the building used by Aon is called The Aon Center .

From 2009 Aon was the shirt sponsor of the English football club Manchester United and was replaced by Chevrolet for the 2014/2015 season .

In addition, between 2009 and 2012 the company was the title sponsor of the Arena Motorsport team in the BTCC and WTCC , which from then on went under the name Team Aon.